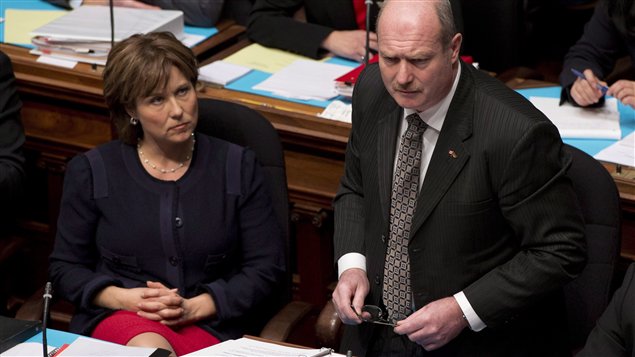 Christy Clark, the premier of the Pacific coast province of British Columbia and Michael de Jong, Finance Minister and the government's House Leader during a session of the provincial legislature earlier this year.
Photo Credit: Jonathan Hayward/CP

There will be no fall sitting of the legislature in the Pacific coast province of British Columbia, the province’s Finance Minister Mike de Jong announced on Tuesday (September 10).

“The duties of MLAs, of elected officials, do not begin and end in the legislative chamber,” said de Jong who is the Liberal House Leader in the legislature.

Horgan said the 85 MLAs are elected to represent their constituents in Victoria and not having that opportunity is offensive.

Premier Clark has been criticized for spending more time in her office in the city of Vancouver on the mainland, then in Victoria the province’s capital on Vancouver Island.

She says the fall session of the legislature is optional, that politicians worked this summer, and that now members of the legislature would spend the fall talking to citizens in their communities: “There are two ways you can go about running government. One of them is to close yourself off in Victoria, figure out what legislation is going to look like and impose it on people without talking to them about it. I’m not going to be that kind of premier.”

The legislature will not resume until February with a Throne Speech and budget.