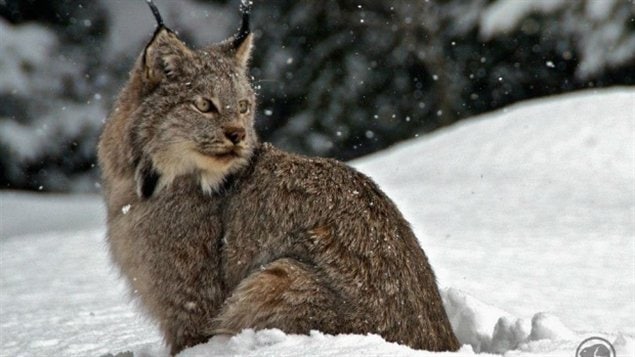 Two lynx were shot by police for "agressive" behaviour. MNR official says it's been a hard winter and the lynz are hungry
Photo Credit: Alex Taylor- Parks Canada

Police in Timmins in northwestern Ontario, have shot and killed two lynx in separate incidents this month.

Red dot indicates TImmins in northern Ontario, in driving distance, about 700 km north of the major urban centre of Toronto, and just over 700 km north-west of the national capitol, Ottawa

Last week, police received reports of a lynx having killed a dog near a popular hiking trail at the north end of the city.

Normal behaviour in the last stages of winter- hungry

Police later shot and killed the animal.  Barbara Burkhardt, a senior fish and wildlife specialist with Ministry of Natural Resources (MNR), said the lynx’ behaviour could be considered normal for this time of year.  “(The lynx) was in the last stages of winter (and was) hungry”, she said.

She noted that people have been putting bird feeders along the trail which has attraced birds and squirrels. This in turn attracted the lynx to a source of prey.

The MNR took down several bird feeders, and  Burkhardt noted that people on the trail should keep their dogs on a leash so they don’t look like food to a hungry lynx.

In the second incident, on Monday, police killed another lynx travelling through backyards in the north end of the city.

They again called for peopleto keep dogs on a leash, and to remove birdfeeders..

Video of female Lynx and kitten at Deer Lodge, Banff Alberta. Conservation officer Alex Taylor says the female may have seen her reflection in a basement window and thought it was another animal that posed a threat to her kitten.