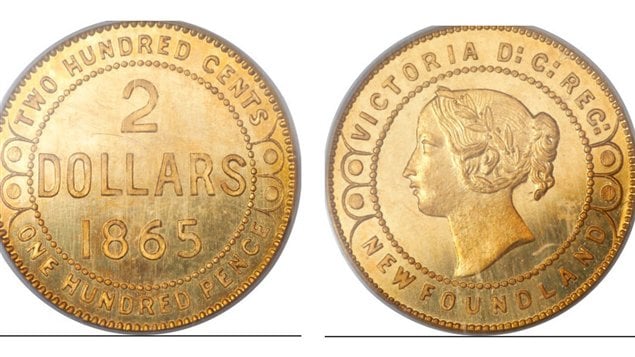 It’s rare. In fact, it’s the only one in the world.

In 1865,  when the now Atlantic province of Newfoundland was still a British colony, a test design was struck for a new $2 gold coin.

The coin is what is known as a pattern specimen- not intended for circulation but merely as a sample for officials to decide on the design. This rare specimen was struck at the Royal Mint in London, England with extra pressure to ensure fine detail.

As that particular design was not chosen, the sample coin remained the only one made. Coin specialist, Fred Bowman, listed it in 1969 as one of “Canada’s” ten rarest coins, although it should be noted, Newfoundland did not become a part of Canada until 1949.

It has had an interesting history and travel experience.. From its initial striking, in 1910 the coin turns up (depending on sources), either at the British Museum, or in a Spinks coin catalogue.  Then it found its way into the King Farouk impressive coin collection in Egypt.   In 1954 it was purchased from the deposed King’s collection at an auction in Cairo for just over $300 for the Norweb collection.

Decades later a portion of the Norweb collection was auctioned off in November 1996 with the rare coin now fetching over US$39,000.

Newfoundland coins are very popular for coin collectors around the world, says Rod O’Driscoll owner of  East Coast Coins. He says that’s because they comprise a complete set. The colony began minting its own coins in 1865 and continued until 1947, two years before Confederation. The limited stretch of time means there are only 145 different Newfoundland coins, and collectors love completing sets, said O’Driscoll.

He says that with this sale,  the pattern specimen $2 coin, is now the most expensive Newfoundland coin ever sold.

Rod O’Driscoll says the person who just bought the coin has already begun offering it for sale.