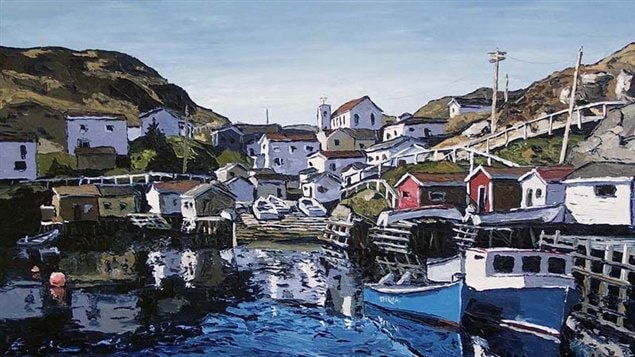 "McCallum" 106cm x 152cm McCallum is a small hamlet clinging to life on the ege of the sea where fishing is the lifeblood. there are no roads, vehicles, or cellphone service.
Photo Credit: artist- Michael Fantuz

Last week we spoke to Christopher Walker and his Pacific west coast inspired artwork and this week we travel several thousand kilometres across Canada to the Atlantic and the island of Newfoundland. Gander is where Michael Fantuz is now based.

Fantuz, who was a featured artist in the prestigious Arabella magazine, works mostly on larger canvases often in the range of 60cm x 128cm.

He has mastered several styles from monochromatic realism, to wonderfully colourful interpretations.

Originally from Ontario, he was surrounded by creative people in his family, but his love of art took a downturn as a teenager due to a rigid art teacher and he put it aside for awhile.

He regained his fascination and desire to create and his passion for art during a trip to Italy where he said, art was everywhere in the architecture, paintings, sculpture and even food.

After a period on the west coast, life and a air traffic control job took him to the Atlantic province of Newfoundland. There he discovered his passion for oil on canvas painting with palette knife.

For that we must be very grateful.

Michael Fantuz has produced works that are evocative and philosophical, while others, retaining some of the philosophical aspect are also joyfully colourful interpretive images of both city  life and especially of the tiny outport communities of Newfoundland.

He continues to explore materials, methods and styles all while creating works that are wonderfully collectible.