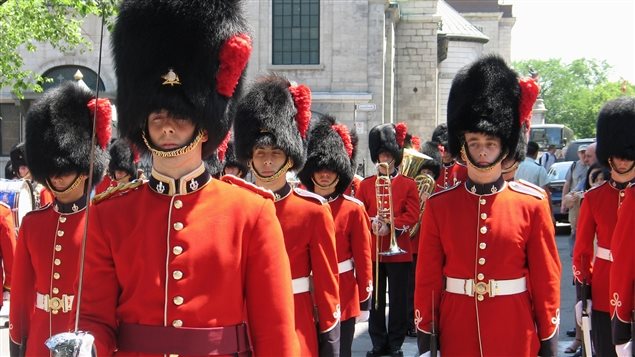 The Ceremonial Guard of the Quebec-based Royal 22e Regiment. The French-language regiment is celebrating its centennail and was the first non-British regiment to ever perform guard duties for the Royal Family.
Photo Credit: Radio-Canada

Some seventy Canadian soldiers, accompanied by various dignitaries, are leaving the country today for a very special duty in London, England.

Members of the Ceremonial Guard of the Royal 22e Régiment are to stand guard at Buckingham Palace, St. James’ Palace and the Tower of London on 14, 16 and 18th of July.

The Quebec-based R22R, are also widely known as the Van Doos (sloppy English pronunciation  for the French “vingt-deux” ie 22) and are Canada’s only completely Francophone regiment.

The Van Doos first stood guard at Buckingham Palace in April of 1940 at the request of His Majesty King George VI, Colonel-in-Chief of the regiment. No other non-British regiment had ever been given the task of guarding the Royal family.  It was also a first for the King’s Guard Sentinels outside Buckingham, and St James to receive commands, not only from a non-British unit, but also in French

Many thousands of tourists will be given a unique opportunity to witness the Canadians during the iconic Changing of the Guard ceremony.

In that formalized ceremony, the old guard hands over responsibility for protecting Buckingham Palace to the new guard. This is a responsibility accorded to active infantry regiments whose members show discipline and precision in their movements.

During their stay in Europe, the Royal 22e Régiment delegation will Parade on Belgium’s national day and visits to the battlefields of Ypres and Passchendale on July 20 to 22; and take part in the “Rekindling the Flame” ceremony on the Champs Élysées in France and visit to the site of the Battle of Vimy Ridge from July 23 to 26..

Raised in October of 1914, at the beginning of the Great War, the R22R is celebrating their centennial this year.