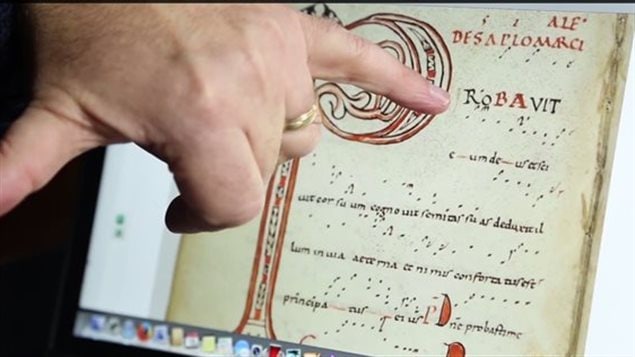 Professor Grier points to a page in the manuscript on his computer screen. This particular section is entirely in Adémar de Chabannes hand; illustration, lyrics and musical notation. This led to the realization that it was Ademar who had created the musical notation for the entire manuscript with this innovation of vertical spacing of notes to designate pitch. (from Professor Grier the lyric reads: "Probauit eum deus et sciuit cor suum; cognouit semitas suas; deduxit illum in uia aeterna, et nimis confortatus est principatus eius". God judged him and knew his heart; He recognized his way of life; He led him into the eternal way, and very much strengthened is his dominion.)
Photo Credit: J Grier- Western U

A Canadian professor and expert in medieval music has made an a truly fascinating discovery.  He has been able to identify the person who made a breakthrough in music notation, and accurately date this innovation, which is now possibly the earliest surviving example of such “modern” music notation.

James Grier is professor of music history in the  Don Wright Faculty of Music at Western University in London, Ontario

Professor Grier is an award-winning musicologist who spent many years in the impressive manuscript room of the Bibliothèque nationale in France.

While studying documents which are almost 1000 years old, a colleague from Sweden asked him about the particular handwriting style of a well-known monk,Adémar de Chabannes (c. 989-1034).

It seems a section of the musical manuscript text was written by Adémar. The handwriting was confirmed by another colleague from Boston who was studying the monk for historical reasons.

Suddenly professor Grier realized that not only was that passage in the monk’s handwriting, but also the musical notation in that passage, and indeed throughout the entire manuscript.

What is unique is that Adémar’s  had placed the notes in the space above the text, higher or lower in the space depending on their pitch, exactly as we do today.

Thus this is the earliest, and perhaps even the very first time this had been done.

“Placement on the vertical axis remains the standard convention for indicating pitch in notation in Western culture and there is far greater weight on pitch than on many other elements such as dynamics and timbre,” said professor Grier.

Professor Grier says this was an incredible innovation in music, enabling a greater degree of standardization in a musical interpretation, and for those seeking to learn the piece.