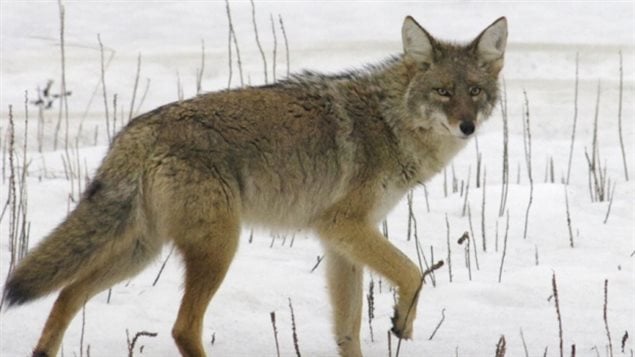 As urban sprawl pushes into wooded areas, many coyotes have adapted to human actiiity rather than flee. Recently it seems they have become less fearful, attacking both people and pets in residential areas. Some interbreeding with wolves has also resulted in a larger "coywolf" animal
Photo Credit: Associated Press

There are growing concerns over a recent increase in the aggressiveness of coyotes in southern Ontario.

In recent years, there have been several attacks on pets, and even on people.  The most recent attack came as a coyote brazenly attacked a cocker spaniel in a back yard in Burlington.

By far, the most developed and populated area of Canada is in southern Ontario spreading out from the country’s biggest city, Toronto.

Known as the greater Toronto area (GTA),  it includes other cities including Oshawa, Mississauga, Brampton and has now spread outward to include the major city of Hamilton (GTHA). The region is home to over 6 million people.

In spite of the urbanization and the vast human presence, coyotes have not been chased away and seem to be thriving.

However, the recent spate of attacks has officials concerned. There have been four attacks on smaller dogs in Mississauga, including one last week in which a Yorkshire terrier was being walked by its owner.

A coyote ripped the small dog from its leash and carried it off into a bush area.

A small Chihuahuas was killed in a driveway by two suspected coywolves, a cross breed between a wolf and coyote.

Of even greater concern was an attack in 2012 on an 8 year old girl playing in a friend’s backyard in Oakville near a wooded ravine.  It tried to grab the young girl’s leg leaving bruises and bite marks, but let go as the children made it to the back door.  Police later killed a coyote nearby.

Coyote Watch Canada, a wildlife advocacy group is heading to Brampton, Mississauga, and Burlington to meet with officials and visit the sites of the attacks.

Lesley Sampson, founding executive director of Coyote Watch Canada, is quoted in the Toronto Star newspaper saysing, “Something’s happened and there’s been a change in coyote behaviour.”  She will also head into the wooded areas to investigate coyote habita to determine what food is available to coyotes and where they are.

Experts say that in some cases people have left food out thinking the animals are stray dogs. They also say people should wait until moring to put out garbage, and keep pets inside at night.