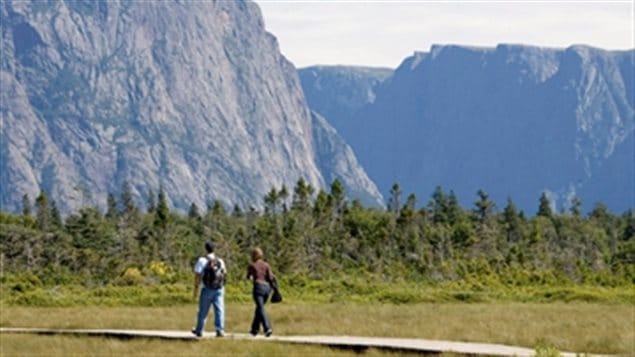 A couple walk along a boardwalk on their way to Western Brook Pond in Gros Morne, N.L., on August 14, 2007. Canadian artists, writers and musicians ranging from Hey Rosetta! to novelist Joseph Boyden are pushing for action to protect Gros Morne National Park.
Photo Credit: THE CANADIAN PRESS/Jonathan Hayward

It is 1,800 square kilometres of rugged, awe-inspiring natural beauty. Canada’s Gros Morne National Park on the west coast of the Atlantic island province of Newfoundland and Labrador is so inspiring that in 1987 the United Nations declared it a world Heritage site.

A letter  (see below) signed by 32 prominent Canadian artists and celebrities has been sent to Prime Minister Stephen Harper, provincial Premier Paul Davis, and copied to the United Nations Organization for Education, Science and Culture UNESCO.

The open letter dated January 5th, and made public today, urges a wide buffer zone around the park to prevent industrialization near the park.

In spite of its somewhat remote location, the hiking trails annually attract thousands of visitors who marvel at the forests, and breathtaking clifftop views down glacier cut fjiords, and other geological wonders such as the Tablelands  which have helped scientists understand how the Earth’s outer crust has shifted over millions of years.

In early 2013, a resource exploration company applied for permission to drill exploratory fracking wells just outside the park boundaries.

It is thought that the area has substantial reserves of oil in the area in a deep formation called the “Green Point Shale”.

That proposal created a great deal of concern for residents near the park, and for environmentalists world-wide due to fracking’s potential to contaminate ground water and create surface  disruption with wastes from the operation.

UNESCO has said that fracking near the park could result in revocation of it’s world heritage status.

In November the provincial government announced a temporary halt to any potential fracking operations while it studied possible effects from the drilling.

The fracking industry,  such as the Newfoundland and Labrador Oil and Gas Industries Association,  says thousands of wells have been fracked in western Canada without environmental damage.

Eric Hebert-Daly, is the executive director of the watchdog group Canadian Parks and Wilderness Society, and helped co-ordinate the open letter as part of a broader campaign for a Gros Morne buffer.

Quoted in the Globe and Mail newspaper today he said, “This seems like a no-brainer. We really just need to find the time and the effort on the part of both governments to find the solution to what that buffer zone needs to look like, and get on with it,” then adding, “Encroaching on the very few areas we have preserved as outstanding examples of the natural world is just, in my view, unacceptable greed, we don’t need to do that.”

We were shocked, therefore, to learn about a proposal in 2013 to conduct oil drilling and hydraulic fracturing (fracking) activities next to the park, considering the threat that this would pose to its ecosystems, its pristine natural beauty, and the thriving local tourism economy.  We were pleased to hear that this threat has been temporarily reduced, with the declaration of a moratorium on fracking in Newfoundland and Labrador, and the petroleum exploration licence off Gros Morne not being renewed. However, these temporary measures will not prevent similar harmful industrial proposals in the future.

During this pause, we urge you to move quickly to create a protective buffer zone around this remarkable national park, a zone that will be kept permanently free from industrialization.

Gros Morne National Park is a magical place. It has captured our hearts, as it has those of hundreds of thousands of visitors from across Canada and around the world. Surely this is why Gros Morne is the cornerstone of the Newfoundland and Labrador tourism industry.

Other World Heritage Sites, including several in Canada, already have buffer zones in place to  provide them with added protection.

Please follow this lead and act quickly to establish a buffer zone around Gros Morne National Park. We believe that all Canadians will thank you for your foresight in protecting one of our greatest natural treasures.