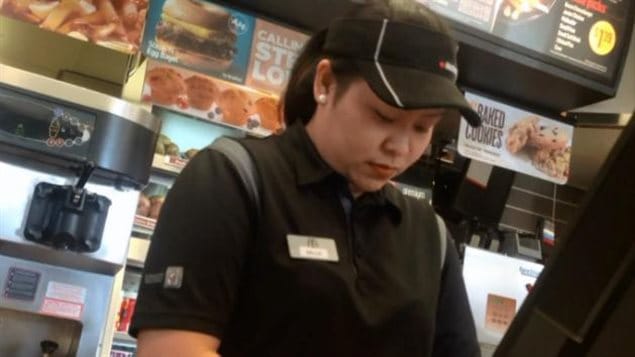 Many of the people working in Canada's fast-food restaurants may be forced to return to their homelands as their Temporary Foreign Worker permits expire tomorrow.
Photo Credit: CBC

Temporary Foreign Workers have been employed in Canada, often doing jobs and services other Canadians won’t. But beginning April 1st, many of their permits expire, ending a four-year stay, and deportation will follow.

The federal government changed the rules of the TFW program in 2011, allowing them to apply to become permanent residents or leave the country.

Many have applied to stay, but the process is so slow they may have to go home before final decisions are rendered.

Peter Wong, a Calgary, Alberta immigration lawyer with Caron & Partners LLP has dozens of clients in this situation. In an interview with CBC, Wong said, “They’re scared; they can’t sleep at night.”

Alvin Sacluti, who works at a fast-food restaurant in Calgary, has been in the city for eight years, and now faces deportation, told CBC, ‘We are still praying. We are still hopeful”.

His colleague, Michele Quiyan, sends most of her paycheque home to her family in Manila every month.  “My son and husband were deeply dreaming about living here, in Canada”, she said in tears.

Many of Peter Wong’s clients have applied to stay through Alberta’s Immigrant Nominee Program, but it can take up to two years to process the requests.

One option they have, is to apply to the province for another four-year permit as a TFW and wait to be formally rejected.  Legally they don’t have to leave the country until they receive that letter.