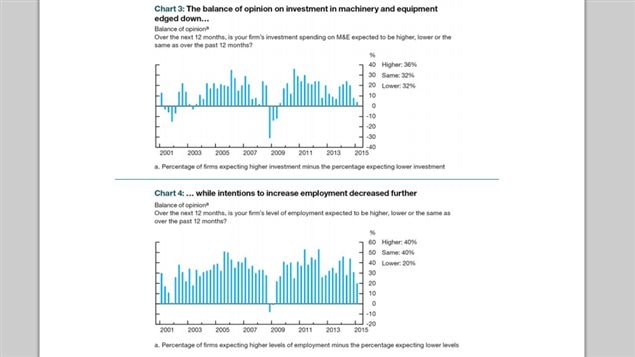 “Lower oil prices continue to dampen the overall sales outlook of firms, weighing on investment and hiring intentions. However, a majority of businesses are benefiting from the strong economic outlook in the United States and the boost in competitiveness from the weaker Canadian dollar,” according to Canada’s central bank, the Bank of Canada, in its Spring 2015 Business Outlook Survey.

More businesses than in previous surveys “anticipate an outright decline in sales volumes. While lower oil prices are significantly dampening the near‐term outlook for firms in the energy sector, responses to the survey indicate some spill overs to other sectors, either for firms that are part of the energy supply chain or through indirect effects.”

The balance of opinion on investment in machinery and equipment edged down, to just above zero, “suggesting that firms expect to invest about the same amount during the next year as they did over the past 12 months… Weakness in investment intentions was concentrated in the goods sector and among firms that reported being adversely affected by lower oil prices, and was often associated with higher levels of uncertainty. Intentions to invest are more widespread among firms based in Central Canada and those in the services sector.” [Most of the energy sector is concentrated in Western Canada.]