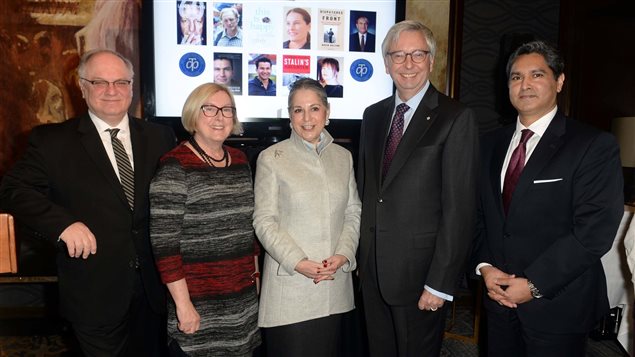 And then they were five.

Speaking at a packed press conference at the Omni King Edward Hotel in Toronto, jurors Susanne Boyce, Joseph Kertes, and Stephen J. Toope announced the five finalists for one of Canada’s most prestigious and lucrative prizes for excellence in literary non-fiction.

To arrive to the shortlist for the 2016 RBC Taylor Prize the jurors had to whittle down a list of 120 book written by Canadian authors and submitted by 39 Canadian and international publishers to a longlist of 12 authors, which was announced in early December.

The finalists for the 2016 RBC Taylor Prize are: 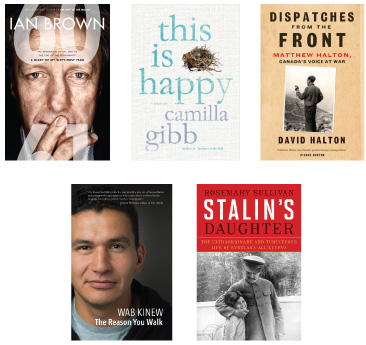 “Having read each of the books on the longlist, I know how difficult it must have been to arrive at today’s decision,” said Noreen Taylor, founder of the Prize and chair of the Charles Taylor Foundation. “The jury had to choose between a dozen excellent books, with subjects spanning the deeply personal to the poetic and a quality of writing that is uniformly strong.”

The winner will be announced on March 7th at the annual RBC Taylor Prize gala luncheon at the Omni King Edward Hotel in downtown Toronto. The winner will receive a $25,000 cash prize and a crystal trophy; the remaining four finalists will each receive $2,000.

2016 marks the fifteenth awarding of the RBC Taylor Prize, which commemorates Charles Taylor’s pursuit of excellence in the field of literary non-fiction.

The prize is awarded to the author “whose book best combines a superb command of the English language, an elegance of style, and a subtlety of thought and perception.”