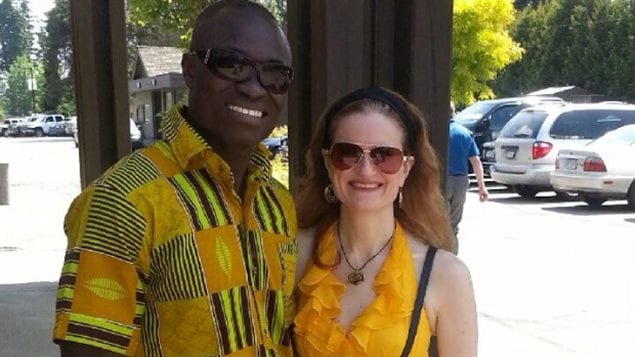 Eric and Dorrie Manu are leaving Canada to return to his village, Adansi Aboabo 2, in Ghana where they will become *King and Queen* of a 6,000 member tribe. their young child will become a *prince*
Photo Credit: Dorrie Manu/Facebook

Canadian Chief and Queen-mother for tribe in Ghana

A 32-year-old Ghanaian-Canadian immigrant, and his Canadian wife will soon be assuming an important role in Ghana when they return to the African country this week.

A few years ago, Eric Manu was working as a tour guide in a slavery museum in that country. That is where he met his Saskatchewan-born wife Dorrie (nee Block) who was pursuing doctoral studies there.

They fell in love and married. They stayed there for a couple of years, but three years ago moved to Canada to Langley, in west coast British Columbia

Working at a landscaping company, Eric got a phone call last year saying he had been elected as chief of the 6,000 member tribe in southern Ghana. He and his wife were aware this could happen as the former chief, (or “king”) had died some time earlier, but there were competing claims and they didn’t expect it could happen for at least a few more years.

Eric will assume the role of tribal leader in a swearing in ceremony this week, while Dorrie will be known as “Queen-mother” and their son will be a “prince”.

Since the phone call, they had begun an effort to help the villagers they will soon govern by gathering donations of things like computers, clothes, bicycles and so on.

Although having the title of Chief or even King, Eric’s role is similar to that of a Canadian town Mayor, settling local disputes,  and deal with government officials. The Queen-mother will help with improving the life of villagers where the main income is from farming and timber, with some coming from mining operations in the nearby mountains.