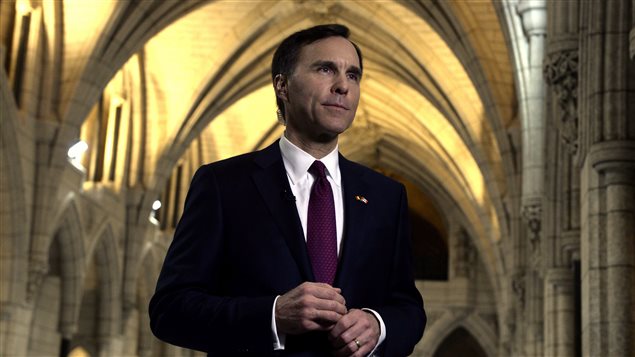 Minister of Finance Bill Morneau takes part in media interviews in the foyer of the House of Commons after delivering the federal budget on Parliament Hill in Ottawa on Tuesday, March 22, 2016.
Photo Credit: PC / Adrian Wyld

The Liberal government of Prime Minister Justin Trudeau backed up some of its foreign policy ambitions with some hard hash when Finance Minister Bill Morneau presented his first budget last week.

Michael Bell, a four-time Canadian ambassador in the Middle East and Paul Martin (Sr.) Senior Scholar in International Diplomacy at University of Windsor, said the budget is a definite boost for the kind of a multilateral activism that the prime minister advocated when he was leader of the Liberal Party.

“I think it give substance to those activities and allows us to play a substantive role as an interlocutor, as a party that is interested in fair-minded solutions and prepared to become involved with allies and with others in terms of facilitating those solutions,” Bell said.

(click to listen to the full interview with Michael Bell)

Even before Morneau tabled the budget, the Liberal government had already made several foreign policy announcements resulting in more than $5 billion of spending, including $2.65 billion by 2020 to help developing countries deal with climate change; more than $1.6 billion over three years, starting in 2016–17, towards security, stabilization, humanitarian and development assistance for Iraq, Syria, Jordan and Lebanon; $678 million over six years, starting in 2015–16, to respond to the Syrian refugee crisis and aid in the resettlement of 25,000 Syrian refugees; and $100 million in 2015–16 to the United Nations High Commissioner for Refugees, to help support critical relief activities in the region.

It provides for immediate funding of $256 million over two years to Canada’s International Assistance Envelope (IAE). In addition, Budget 2016 proposes to allocate up to $586.5 million over three years, starting in 2016–17, for the renewal of key peace and security programs. This includes up to:

“Our voice is now heard loud and clear on the international stage,” Morneau said in speech in the House of Commons.

Investing in securing and restoring international peace and security is a smart investment for Canada, Bell said.

On February 8, 2016, the Government announced a new approach to respond to the ongoing crisis in Iraq and Syria, and its impact on the region. The Government has committed more than $1.6 billion over three years, starting in 2016–17, towards security, stabilization, humanitarian and development assistance for Iraq, Syria, Jordan and Lebanon, including:

“Peace and security in any given region serves Canada’s interests,” Bell said.

The Liberals are expected to gradually increase the funding for Canada’s beleaguered diplomatic service as they identify their foreign policy priorities, Bell said.

The Liberals are also keen on capitalizing on opportunities for Canada’s accelerated involvement in trying to find solutions, for international crises that could require expertise and the involvement of Canadian experts and diplomats, Bell said.

“In overall terms, those kinds of activities aren’t necessarily all that expensive,” Bell said. “They wouldn’t have occurred under the previous regime because the previous Harper administration believed in a kind of isolationism.”

The Harper government didn’t want to get involved in multilateral international institutions and processes like the United Nations because it somehow saw such cooperation as compromising on their principles and moral high ground, Bell said.

“What is different with the present government is not that we don’t have a policy that is going to be based on principles,” Bell said. “But I think there is a recognition that one has to work with others in order to give effect to one’s objectives, and that sometimes means an accommodation to the views of others.”

Ottawa’s commitment to securing not only a seat on the Security Council but also making it voice count in international affairs is likely to result in more “fair-minded interventionism,” Bell said.

“In other words, when we look at the dispute between Israel and Palestinians, I don’t think the policy is going to change that dramatically but the approach is going to change,” Bell said. “It’s going to be a fair-minded approach where we try to look at both sides of the argument and do what we can to bring some kind of a reconciliation between the two that allows for the achievement of peace.”