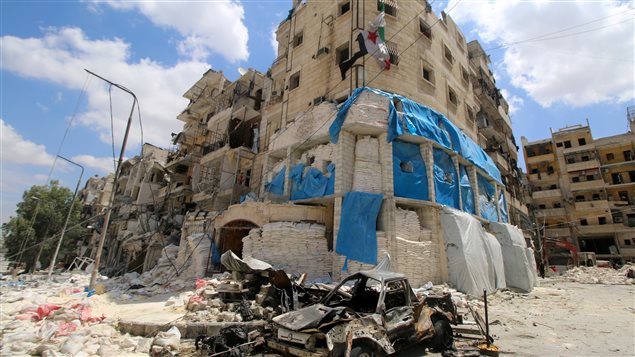 Burnt vehicles are pictured in front of the damaged the Medecins Sans Frontieres (MSF)-backed al-Quds hospital after it was hit by airstrikes, in a rebel-held area of Syria’s Aleppo, April 28, 2016.
Photo Credit: Abdalrhman Ismail / Reuters

“Canada is alarmed that violence directed against humanitarian personnel has been on the rise, and particularly that medical facilities have been deliberately targeted in many cases,” Canada’s Foreign Affairs Minister  Stéphane Dion and International Development Minister Marie-Claude Bibeau said in joint statement.

All humanitarian workers, including those engaged in medical duties, are protected under international humanitarian law, the statement warned.

“The resolution reaffirms not only that medical personnel must be respected and protected, but also that the wounded and sick must be able to receive the medical care and attention required without acts or threats of violence,” said the statement. “This is vital for the delivery of health care in situations of armed conflict and for preventing future attacks on humanitarian personnel and health facilities.”

The statement comes after government air strikes in Syria destroyed the last hospital in rebel-held districts of Aleppo, killing dozens of patients and at least three doctors.

Among those killed in the MSF-supported al-Quds hospital was one of the city’s last paediatricians, MSF tweeted.

At least 3 doctors killed in attack on #MSF-supported hospital, including one of last paediatricians #Aleppo, #Syria. Hospitals #notatarget

A separate strike has also destroyed a Canadian-run clinic, but, fortunately, no one was injured.

“In addition to the deplorable immediate deaths and injuries, attacks on medical personnel and facilities have devastating long-term consequences for civilians and national health care systems in affected countries,” Dion and Bibeau said in the statement.

“Canada strongly condemns the targeting of health facilities and personnel in the Syrian conflict. We call on all parties to the conflict to respect international humanitarian law and provide humanitarian workers with safe, full and unhindered access to those in need.”