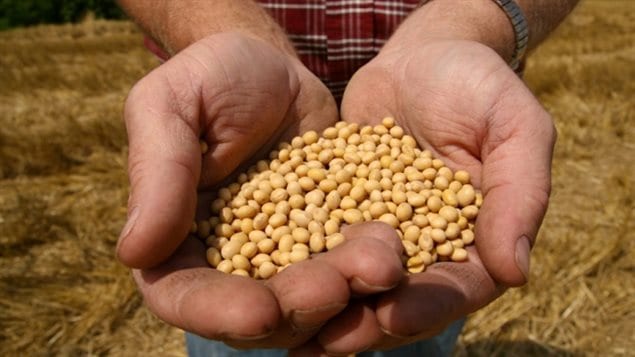 Soy Canada, a farming/marketing advocacy association wants the EU to explain a delay in EU approval for 3 GM soy products created by Monsanto and Bayer
Photo Credit: via cbc

The national association representing the soybean industry in Canada wants to know why the European Union is delaying approval of genetically modified soy products.

Soy Canada sent a letter to the European Commission requesting a formal explanation for the EU delay in approving three GM soy products.

In a press release, the association called on the EU to honour commitments in the Comprehensive Economic Trade Agreement (CETA) negotiations.

Jim Everson, Soy Canada’s Executive Director, said in a statement, “We are calling on the EU Commission to formally explain why approval of these three products is continuing to be delayed and why its commitments made in CETA negotiations are not being honoured”.

Three and half months have passed since the three products were considered by the EU Appeal Committee.

Soy Canada says the three products were reviewed by the European Food Safety Authority and given a “Positive opinion” clearing them of any food, feed, or environmental concerns.

Canadian soybean producers will begin seeding this week and Everson said, “The EU is also failing to respect a commitment it made to Canada during the Canada – European Union Free Trade negotiations. We are calling on the EU Commission to formally explain why approval of these three products is continuing to be delayed and why its commitments made in CETA negotiations are not being honoured,”

Monsanto, makers of Roundup Ready 2xtend soybeans, one of the products pending EU approval, said it will delay shipments of seed to Canada for commercialization. Monsanto also developed one of the other GMO soy products, and Bayer, the third product.

Soy Canada is pressing the federal government to in turn pressure the EU for approval of the GM soy products and an explanation for the delay.

Canadian and EU officials are in regular contact as CETA moves for final consideration by legislators.

Canada and the EU  will also begin formal discussions on biotechnology and trade issues at an upcoming meeting of the Canada-EU Biotechnology Dialogue, due to take place within weeks.