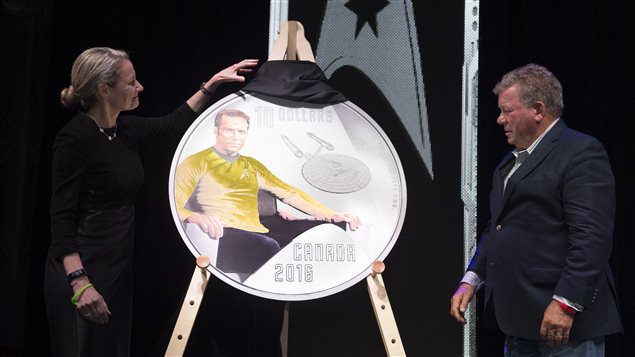 Royal Canadian Mint President and CEO Sandra Hanington and actor William Shatner unveil the first coin in a new collection celebrating the 50th anniversary of Star Trek: The Original Series at the Canada Aviation and Space Museum in Ottawa, Ontario on May 12, 2016.
Photo Credit: The Royal Canadian Mint

The Royal Canadian Mint has unveiled a new set of collectible coins and stamps to celebrate the 50th anniversary of Star Trek: The Original Series.

(click to listen the full interview with Alexandre Reeves)

“It’s a combination of the people who were involved in the series and also we’ve done a number of popculture-themed coins recently,” Reeves said. “Since our coins are about capturing the full spectrum of the Canadian experience, pop culture is very much an element that many Canadians identify with, that is part of their lives, and it’s a theme that resonates with a lot of Canadians.” 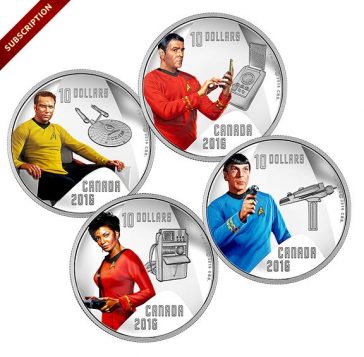 A $10 coloured silver coin picturing Captain Kirk was unveiled by Shatner and Mint president and CEO Sandra Hanington at an event hosted by the Canada Aviation and Space Museum on Thursday.

“For 50 years, Star Trek captured the imagination of countless fans by entertaining us while opening our eyes to the possibilities of science and the wonders of our vast universe,” said Haningto. “The Mint is proud to celebrate a cultural phenomenon that has carved a space in the hearts and minds of Canadians and fellow Star Trek fans all over Planet Earth.”

The bulk of the coins, produced under license by CBS Consumer Products, are made of 99.9 per cent pure silver and feature colour over an engraved image, Reeves said.

“There is a nice relief to the coins with colour on top of it,” Reeves said. “It really pops as a striking image whether it’s Captain Kirk sitting on the bridge of the Enterprise or it’s a scene from a favourite episode like Trouble with Tribbles.”

There is also a pure gold coin of the delta-shaped Star Fleet insignia.

“That’s the world’s first delta-shaped coin for the record and it’s struck in pure gold in a very limited mintage,” Reeves said.

For those who can’t afford to shell out $1,299.95 for the Delta coin, the Mint has also produced a Star Trek coins and stamps collection that at $34.95.