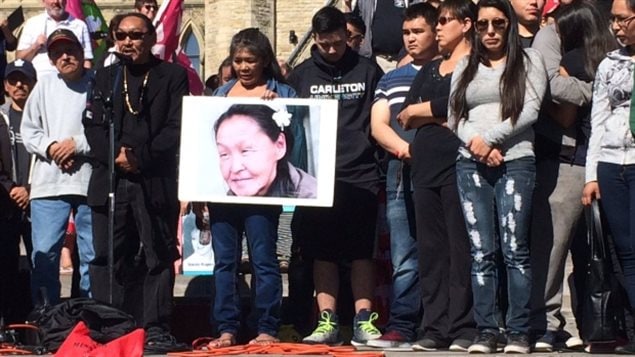 A photo of Annie Pootoogook, the Inuk artist who was found dead in the Rideau River in Ottawa last month, was among the hundreds of missing and murdered Indigenous women and girls mourned on Parliament Hill today.
Photo Credit: CBC News / Chloé Fedio

Missing and murdered Indigenous women and girls were remembered across Canada today in annual events that began as a means to raise awareness and demand action from Canadian authorities.

Native women’s groups have been organizing vigils across Canada under the Sisters in Spirit banner, since 2006. They expressed frustration today that little has changed.

Prime Minister Justin Trudeau attended the memorial in Ottawa. He addressed the crowd saying, “I hope that we continue to gather on these steps for as long as Parliament behind me stands… to remember the beautiful sisters that were taken from us and that we weren’t able to protect and uphold.”

“But I hope in the coming years that we will be able to do it as a remembrance of things past and not as a reflection of an ongoing national tragedy that continues,” Trudeau said, flanked to his left and right by Indigenous Affairs Minister Carolyn Bennett, Justice Minister Jody Wilson-Raybould and Status of Women Minister Patty Hajdu.

These three female politicians were in charge of establishing the inquiry into MMIW,  that began in August.

Algonquin Bridget Tolley told CBC News she’s been fighting for justice in the case of her mother for 15 years.

A variety of events took place today including walks in remembrance.

In Yellowknife, the Sisters in Spirit walk was organized by the Native Women’s Association of the Northwest Territories.

“I always think about by doing this, by walking, by helping with the activities and organizing it, I’m saying that I’m thinking about them and I’m doing this in honor of them and I care,”  Marie Speakman, a victim services worker with the association, told the CBC’s Juanita Taylor.

“I know it’s a sensitive topic and people can shy away from it. But I always think about this walk as helping to make more awareness, that it’s not only happening in the south but in the North too.

“They don’t have to say anything, but really to walk with us.”