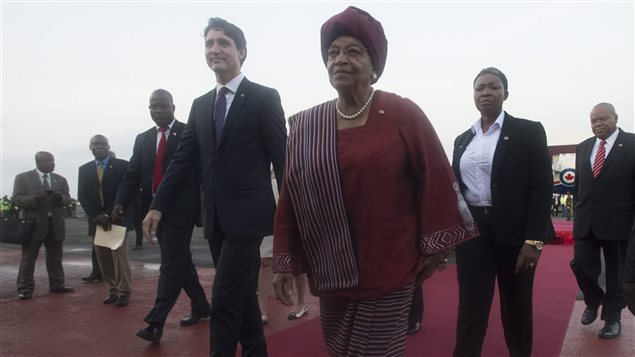 Prime Minister Justin Trudeau concluded today his one-day visit to Liberia where he pushed his message of empowering women and girls, promoting human rights and re-engaging with Africa.

But Trudeau had to tone down some of his gay rights rhetoric in the deeply conservative West African country, where homosexuality is criminalized as “a first-degree misdemeanour,” an offence punishable by up to one year in prison.

Most African countries criminalize homosexuality in one way or the other. And of 49 African states only South Africa recognizes gay marriage.

“The fact is different countries have different paces of evolution in terms of recognizing and enshrining those rights, but we can see that there has been tremendous progress over the years in many different areas,” Trudeau said Thursday morning in the capital Monrovia.

Trudeau praised Sirlieaf, the first female elected head of state in Africa, for her leadership in fighting the deeply rooted cultural practice.

“I understand that culture can be a challenge in pushing that, but doing the right thing is something that people shouldn’t shy away from,” Trudeau said.

Trudeau said her leadership on gender equality and the advancement of girls and women is the main reason he wanted to make Liberia the first stop on his first visit to Africa as prime minister.

“The role that women played in bringing an end to the civil war and helping Liberia rebuild is an inspiration to the rest of the world,” Trudeau said during the news conference.

Discussing empowerment and opportunity for women and girls in Liberia, Africa & the world today in Monrovia. pic.twitter.com/nibWko4qYY

Trudeau backed up that message with some $12.5 million in funding announcements “aimed at supporting democracy, peace and security, inclusion, and gender equality in Africa.”

In 2014-2015, Canada provided more than $24 million in development assistance to Liberia, in the areas of health, education, food security, and the environment.

Trudeau, who before launching into politics was trained as a teacher, also spent some time with Liberian school children.

I’m always happy to be back in the classroom – thanks
for showing me the #powerofplay in action, Slip Way School. pic.twitter.com/AUbl9JSWF8

On Friday, Trudeau will fly across the African continent to Antananarivo, Madagascar, for the summit of la Francophonie, an international organization of French-speaking nations, which is now headed by Canada’s former governor general Michaëlle Jean.

Trudeau will deliver a speech focused on the empowerment of women and girls, as well as gay and transgender rights.

Canada is also putting the final touches on a joint resolution with the nation of Benin to put an end to forced and child marriages, an issue that was also championed by the previous Conservative government.