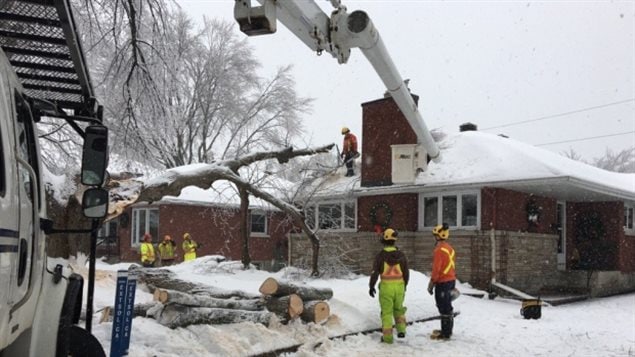 Workers dismantle a tree that fell onto a home in Ottawa this morning. Several trees in the area came down after freezing rain and snow fell throughout the region.
Photo Credit: CBC / Roger Dubois

Hydro Quebec is out in force today with 150 crews trying to restore power to more than 62,000 customers.

In Ottawa and eastern Ontario the situation is similar with tens of thousands of homes in the dark.

“Yesterday [Tuesday] we had some ice on branches of trees, and the branches that broke touched the grid, so we had some power failures,” Eric Moisan, a Hydro Quebec spokesperson said early today.

A snowstorm that warmed up to freezing rain coated branches in ice, that weighed them down onto power lines cutting the connection, or brought the whole tree down on homes and cars in several locations.

The storm continued eastward through Quebec closing highways and ferry crossings and traffic on the St. Lawrence river.

The conditions bring chilling reminders to many of the Great Ice Storm of 1998 that began on January 4th. Millions in eastern Ontario, Quebec, and some of the Atlantic provinces were left in the dark and cold for days, and in some regions, weeks.

The power grid was rebuilt in much of southern Quebec to withstand another similar event.