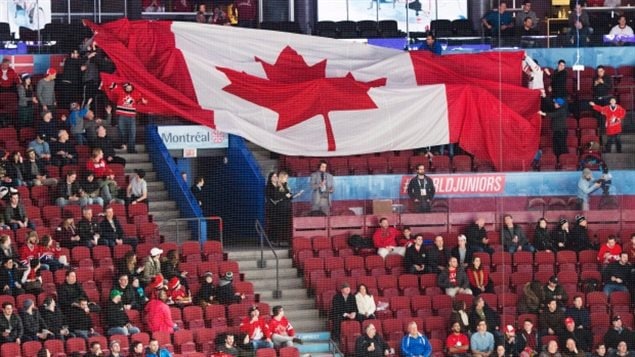 Empty seats make it challenging for fans to pass around a Canadian flag before the quarter-final IIHF World Junior Championship hockey game between the Czech Republic and Canada on Monday in Montreal. Canada won to advance to today's semifinal against Sweden.
Photo Credit: CP / Ryan Remiorz

Montreal is well-known as a ‘hockey town’. Their Montreal Canadians NHL team is one of the oldest sports franchises in North America and the fans support the team with a fervour other teams in the league envy.

But when it comes to international Junior hockey, Montrealers are not so impressed. Monday night’s quarter-final game between Canada and Czech Republic did not even half-fill the Bell Centre. Just 10,215 were in the stands to see the home-team win.

Some people say the pricey tickets were to blame, with seats in the upper levels at $50 (Cdn). Others say the tournament is not so special, since it was played here just two years ago.

Montreal and Toronto are both host cities to the IIHF World Junior Championship, and the turn-out is much better in Toronto. Near capacity crowds have turned out for the competition in that city.

It may be a different story in Montreal tonight at the semi-final match; the Canadian team play the Swedes, and the winner will play the victor in the Toronto face-off between the U.S. and Russia. Now it’s getting interesting.