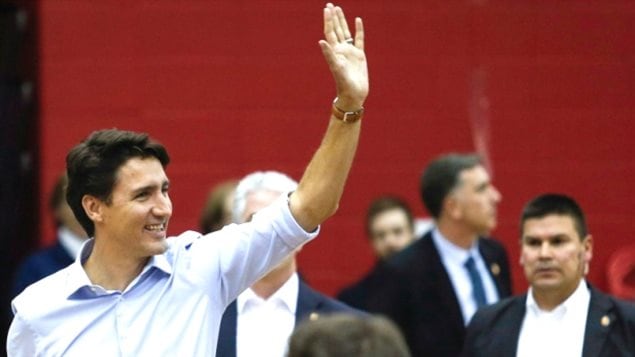 Prime Minister Justin Trudeau had a challenging time in Calgary last night. The PM spent the last two days in the western city for a retreat with his 29-member cabinet,

But last night he continued his ‘meet the people tour’, appearing in a town-hall format at the University of Calgary. This tour is seen as a damage control measure following the controversies stirred by his pay-for-access dinners, and Christmas vacation.

Last year the Prime Minister was meeting donors who paid $1500 (Cdn) to dine with him in the homes of wealthy Canadians. Then over the Christmas break, the PM with his family and some friends, vacationed on the Aga Khan’s Caribbean island.

The visit was kept secret until the new year and there has been a fair amount of criticism since. The trip required the PM to take the Aga Khan’s private helicopter to get to the island. Travelling on a private aircraft is strictly forbidden for a sitting Prime Minister. And while the Aga Khan has been a close family friend of the Trudeau’s, the Aga Khan Foundation is the recipient of Canadian government donations, and so the vacation raised a lot of questions.

Skipping Davos for donuts, Justin Trudeau did not attend the World Economic Forum and began instead, meeting Canadians in coffee-shops. At one of the first events in eastern Canada, the Prime Minister had said the oil sands had to be phased-out. This was not appreciated by some in the Calgary audience.

There was loud applause to greet the Prime Minister, but there were ‘boos’ and jeers underlying the greeting as well. And eventually this gentleman got to put his question to the PM, eliciting a passionate response.

In a press conference earlier in the day, Trudeau was commenting on the news President Trump had reversed Obama’s decision, and greenlighted the Keystone XL pipeline. Trudeau, who said he’d spoken to the new U.S. president twice, received it as very good news.

“I reiterated my support for the project. I’ve been on the record for many years supporting [Keystone XL] because it leads to economic growth and good jobs for Albertans,” Trudeau told reporters.

“We know we can get our resources to market more safely and responsibly while meeting our climate change goals,” he said, adding that Alberta Premier Rachel Notley’s hard cap on oilsands emissions ensures Canada meets its reduction targets.

Yesterday Trump issued a presidential memorandum, allowing, TransCanada, the opportunity to reapply for a presidential permit for cross-border construction.

Keystone XL is the $8-billion pipeline project, which could take more than 800,000 barrels of Alberta oil a day down to refineries in Texas. The devil may be in the details, however, President Trump did say the pipeline project would subject to a “renegotiation of terms by us.”