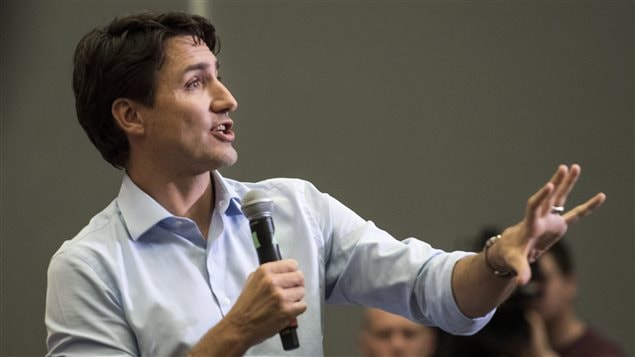 Prime Minister Trudeau speaks at the University of Saskatchewan campus in Saskatoon, on Wednesday. Trudeau says he is not worried about trade disputes with the U.S. under new president Donald Trump.
Photo Credit: CP Photo / Liam Richards

On Wednesday, Trudeau dismissed concerns about U.S. President Donald Trump’s projected America-first trade policies, saying U.S. officials have made it clear Canada has nothing to fear.

“The administration has made it very clear, both to us and publicly, that they are not overly preoccupied with Canada,” he told reporters in Saskatoon, Saskatchewan.

His comments came the same day that Trump signed an executive order to move on construction of his long-promised wall along the U.S.-Mexican border.

But Agustin Barrios Gomez, who founded the Mexican Council on Foreign Relations think tank, told CBC Television Wednesday that it’s just a matter of time before Trump turns his sights toward Canada.

“I think it would be a grave mistake if Canada did not act on principle because when you sacrifice your principles for short-term gain, you end up losing both,” he said.

Canada and the U.S. are the world’s largest trading partners and no other country buys more goods made in the U.S. than Canada.

The government statistics say nine million U.S. jobs depend on trade and investment from Canada and Canada is the number one customer for 35 U.S. states.