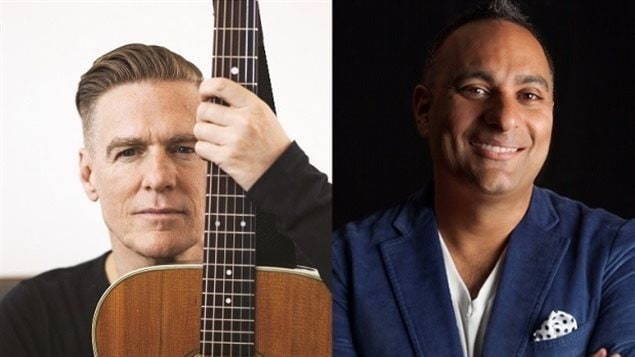 Bryan Adams and comedian Russell Peters will co-host the upcoming Juno Awards, taking over for previously announced host Michael Bublé, who is stepping down to focus on his family.
Photo Credit: CARAS

Bryan Adams the Canadian rocker, photographer and philanthropist, will co-host the Juno Awards with comedian Russell Peters on April 2nd, 2017.

Ottawa is the host city for the event this year. Michael Bublé was originally scheduled to host, but he stepped down in order to focus on his family. His three-year old son is battling cancer.

Peters has hosted the Canadian music awards televsion show twice before, in 2008 in Calgary and in Vancouver in 2009.

“Third time’s a charm! And who better to share the stage with than Bryan Adams? ! I’m actually really excited to be back, and looking so forward to making the 2017 Juno Awards a memorable one,” Peters said in a statement released early today.

“Our thoughts continue to be with Michael — we respect his ongoing commitment to his family and look forward to working with him again in the future,” Mike Cosentino, Bell Media’s senior vice-president of content and programming told the Canadian Press.

“We are thrilled that his friends Bryan and Russell have stepped up to host this year’s broadcast and have no doubt they will deliver an unforgettable show.” he said,