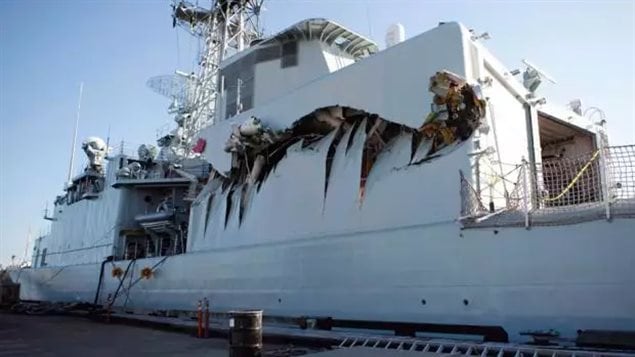 Destroyer HMCS Algonquin in port in British Columbia showing damage after colliding with Canada’s supply ship HMCS Protecteur in 2013. The destroyer was destined to be decommissioned but the extensive damage hastened the process. The already ageing Protecteur later suffered major engine failure. Both ships were decommissioned in 2015. Destroyer HMCS Athabaskan was retired this year leaving Canada with no destroyers or supply vessels.
Photo Credit: THE CANADIAN PRESS/Chad Hipolito

Royal Canadian Navy: A fighting force still, or even protective?

Canada’s navy recently retired its last destroyer. HMCS Athabaskan, as a destroyer, is a medium-sized ship, and was specialized in combatting air threats.  But what kind of navy does Canada now have? Is it a viable fighting force? Canada with three coasts has one of the longest coastlines to defend and only a few ships. Can it even properly defend our own coasts?

Robert Heubert is an associate professor in the Department of Political Science at the University of Calgary and well-known analyst on Canadian naval matters.

With the retirement of our last destroyer, a fighting ship, what kind of Navy is left.?

Canada has 12 modern frigates which are  designed to combine anti-submarine and with some abilities against surface and air threats. At about 130 metres in length, the frigates are similar in physical dimension to the four now retired destroyers.

In addition, after a multitude of delays, serious and deadly accidents, and enormous expense,  the country also now has three 1980’s-era diesel-electric operational submarines of the 4 it had bought from the UK in 1998.

There are also a dozen smaller coastal patrol vessels built in the 1990’s, but that’s about it to patrol and defend the Pacific, Arctic and Atlantic coasts in what a 2003 Senate report called ” the longest under-defended borders in the world. They are vast, they are vulnerable, and, unfortunately, they are largely unattended”.

Canada’s two re-supply vessels were decommissioned and now we are borrowing or renting ships for that role. The country also currently has no military naval transport capability when needing to send equipment abroad for its multitude of international roles.

Historically, Arctic patrol ability has been limited at best  and although new patrol ships are in the works, the first won’t be available for at least another year.

New equipment is purchased all at once and used until well beyond its normal service life when it has to be taken out of service and a wait begins while new equipment, vehicles, planes, ships are built or acquired. Professor Huebert says this cycle of extreme highs and lows in naval, and indeed almost all military capability, is the boom and bust cycle of acquisition.

There are serious consequences for this long existing problem in Canada. He points out that other countries have recognized the problems with such policies and have an ongoing-rolling- replacement policy that keeps up ability and modernization.

Part of the problem in Canada, perhaps especially so with ships, is the infighting between regional builders and political necessity to spread contracts around.

Still, professor Huebert says that Canada excels in the abilities of its sailors, who are extremely well-trained and capable.   Thanks to their training and enough upgrades, Canadian ship, although few in number are able to function internationally with allies in spite of equipment limitations. But because of that ability and seeming lack of “problems”, that has also meant that naval needs are often left out of the spotlight.

He does note that there is a move to overcome the longstanding boom and bust policy. The government is working on a new programme called the National Shipbuilding Strategy which seeks to develop a more long-term process of building ships for the navy and coast guard including a new class- Canadian Surface Combattant- designed to replace the now retired destroyers’ role and the current Halifax class frigates. Initial contracts are to be let only starting in 2021.