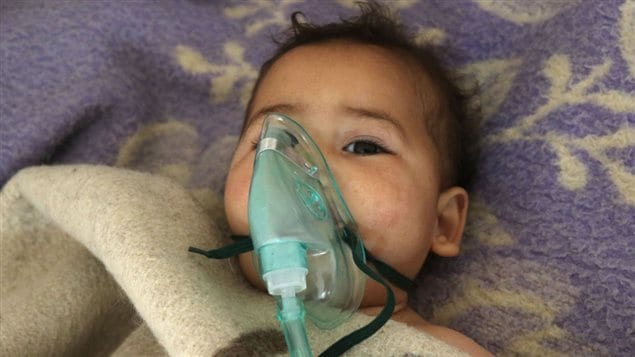 A Syrian child receives treatment at a small hospital in the town of Maaret al-Noman following a suspected toxic gas attack in Khan Sheikhun, a nearby rebel-held town in Syrias northwestern Idlib province, on April 4, 2017.
Photo Credit: MOHAMED AL-BAKOUR

U.S. cruise missile attacks against Syrian military targets believed to have been behind a deadly chemical weapons attack in northern Syria mark a new and unpredictable phase in the six-year-old war, says a Canadian expert.

The U.S. Navy launched 59 cruise missiles on Thursday in response to the attack in the northern Idlib province that killed at least 80 civilians, including 20 children in what President Donald Trump had called “a disgrace to humanity.”

Kyle Matthews, Senior Deputy Director of the Montreal Institute for Genocide and Human Rights Studies at Concordia University and a Fellow at the Canadian Defence and Foreign Affairs Institute, says while the U.S. strike against President Bashar al-Assad’s air force degrades its capacity to carry out any other attacks against civilians and using chemical weapons, it also puts the trajectory of the wider conflict onto a path of possible confrontation with Russia.

Russia warned on Friday that U.S. cruise missile strikes on a Syrian air base could have “extremely serious” consequences.

“We strongly condemn the illegitimate actions by the U.S. The consequences of this for regional and international stability could be extremely serious,” Russia’s deputy U.N. envoy, Vladimir Safronkov, told a meeting of the U.N. Security Council on Friday.

Russian Prime Minister Dmitry Medvedev charged that the U.S. strikes were one step away from clashing with Russia’s military.

“Clearly Syria is strategically very important to Russia and Russia will do whatever it can to defend the Assad regime, because its interests are supported by keeping Assad in power,” Matthews said.

Russia has already promised to boost Syria’s air defence system and is moving more equipment and a part of its navy closer to Syria, he said. Russian defence officials also announced that Russia is suspending an agreement with the U.S. designed to avoid collisions between their air forces over Syria.

“We don’t know where this is going, I hope cool heads will prevail and we can focus on actually trying to stop this conflict,” said Matthews.

U.S. ambassador to the United Nations Nikki Haley said on Friday the Trump administration was ready to take further steps if needed.

“We are prepared to do more, but we hope that will not be necessary,” she told the U.N. Security Council. “The United States will not stand by when chemical weapons are used. It is in our vital national security interest to prevent the spread and use of chemical weapons.”

However, the confrontation with Russia and the Syrian regime could derail Trump’s plans to work with Russian President Vladimir Putin in fighting ISIS. The U.S. is already involved in the conflict in Syria and has a number of special forces soldiers working with Kurdish groups fighting Islamic State militants in the east of the country, trying to retake the terror group’s stronghold of Raqqa, Matthews said.

“They really needed the support of support of the Syrian government at least in some manner but also Russia and now it appears that’s going to become a major challenge,” he said.

Asked whether the strikes set back any efforts to work with Russia to defeat ISIS, White House spokesman Sean Spicer said:

“There can be a shared commitment to defeat ISIS and also agree that you can’t gas your own people.”

His robust response to the poison gas use in Syria allows Trump to score some much needed political points at home and to differentiate himself from the previous Obama administration, which baulked at the idea of using force in response to a much bigger chemical weapons incident in 2013. It also portrays him as someone who is willing to uphold international law and to punish a regime that’s using chemical weapons against its own population, Matthews said.

“We’ve seen chemical weapons be used multiple times in this conflict and every time there was never anything done seriously to hold [responisble] Assad or some of the rebels that had used other chemical agents,” Matthews said. “It’s an ugly conflict, it’s a devastating conflict and up to this point most Western governments haven’t shown any leadership in trying to uphold the chemical weapons treaty, trying to uphold the responsibility to protect, trying to uphold all sorts of human rights and international humanitarian law that’s been broken over and over again.”