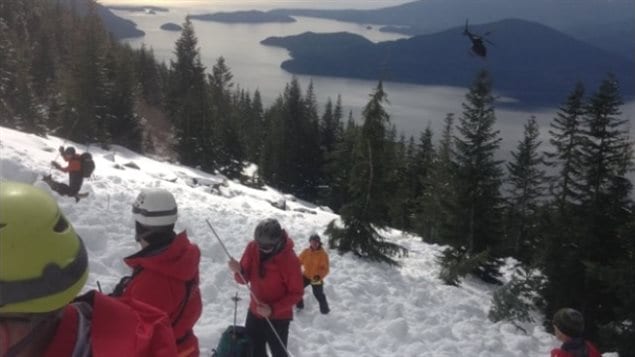 Searchers use probes to search for the bodies of five hikers after they fell 500 metres from the top of Mt. Harvey near Lions Bay B.C.
Photo Credit: (Chilliwack SAR/Twitter)

Search and rescue teams in British Columbia, on the West Coast of Canada, have recovered the bodies of five hikers, believed to have fallen off a sheer cliff on Mount Harvey on Saturday, about 35 kilometres north of Vancouver.

Authorities believe the group fell nearly 500 metres to its death after stepping on a cornice near the peak of the mountain.

The authorities were alerted by a sixth hiker with the group who had fallen behind and arrived at the summit only to find that the other five had disappeared, Colwell said. Colwell said the surviving hiker met another person walking up the trail who then alerted police.

“The tracks were at the summit and there was an obvious sheer break in the snow over the north face,” he said.

Colwell said blowing winds and snowdrifts can create very “dangerous” and “deceptive” ledges and cornices of unsupported packed snow on the mountain.

“It creates a nice gentle curve to the downwind side and it looks like a nice gentle slope in fact to walk on, and tempting to walk on because there is no brush in the way. Unfortunately you can’t see the edge of the mountain face below it.”

The bodies of four of the five hikers were found early in the day Sunday, while the body of the fifth victim was not recovered until the late afternoon.

Colwell said the five victims were from B.C.’s Lower Mainland and were part of a regular hiking group.