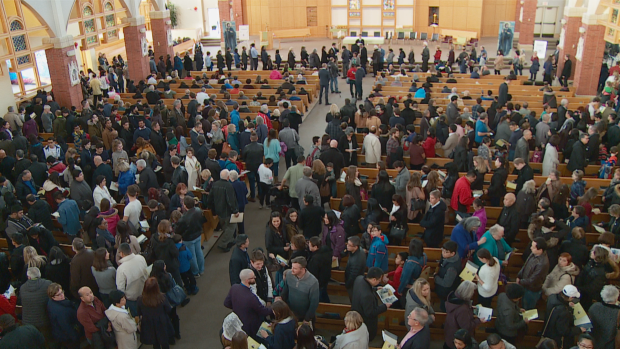 St. Francois Xavier is being venerated, or at least his forearm is, in 15 cities across Canada these days.

The 16th century saint, was one of the founders, along with St. Ignatius of Loyola and Saint Peter Faber, of the Society of Jesus, known as the Jesuit order of priests.

Francis Xavier died in 1552 off the coast of China, but his body did not decompose. It is said to be uncorrupted.

At the time, it was considered evidence of his saintliness and eventually his right arm, which baptized thousands, was severed at the request of the head of the Jesuit order in 1614.

Francis Xavier’s body was returned to Goa, India, where it rests today, and the right arm is now displayed in the Church of the Gesu in Rome.

Father Robert Brennan is a Jesuit who teaches Church History at Loyola High School, a boys school in Montreal.

This tour of Canada was organized by the Catholic Christian Outreach organization and Archbishop Terry Prendergast, a Jesuit, and former student of Loyola in Montreal.

It is a gift to Canada as the country moves beyond the 150th anniversary of Confederation. 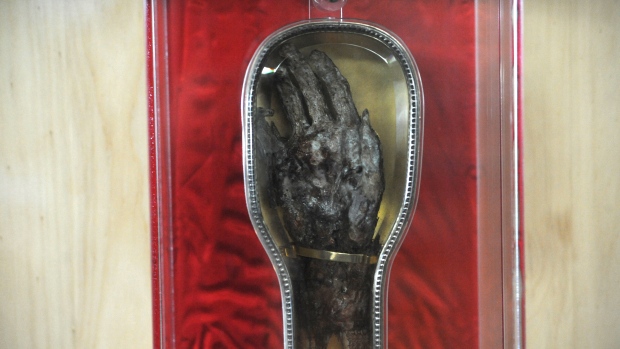 The severed arm of St. Francis Xavier was on display at Saskatoon’s Cathedral of the Holy Family (Julian Smith/EPA/CBC)

Father Brennan, who admits to finding it all a bit “perplexing”, says he put the relic into context for his students by drawing parallels to the pioneers of space exploration today.

Francis Xavier, like the Jesuit priests who came to Canada in the following century, were going to explore the “final frontiers” of their day and time.

But like the colonial history and dark legacy of religiously-run Residential Schools in Canada, the legacy of St. Francois Xavier can be linked to the Goa Inquisition, which resulted in as many as 16,000 deaths by the time it ended in the early 19th century.

Meanwhile, Catholics in Canada today, are turning out in surprising numbers to encounter a mystery, and perhaps a moment of grace for themselves.

The tour continues in Ottawa, until February 2nd,

One comment on “St. Francois Xavier relic on tour in Canada”