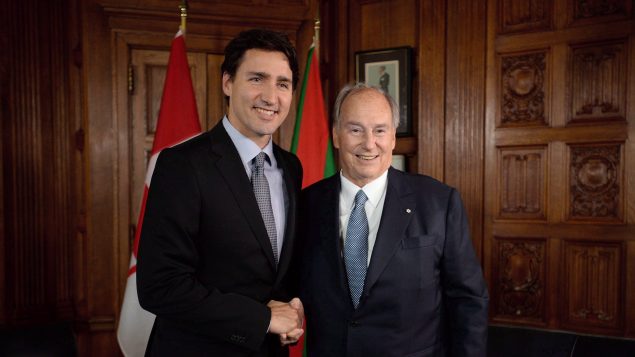 PM Trudeau to attend dinner for Aga Khan in Ottawa

The Aga Khan, the billionaire spiritual leader of the world’s 15 million Shia Ismaili Muslims, is in Ottawa this week to celebrate his Diamond Jubilee and will be feted at a dinner at Rideau Hall hosted by Gov. Gen. Julie Payette on Wednesday.

The Aga Khan, who in 2010 became the fifth person to be named an honorary citizen of Canada, is also expected to meet with Prime Minister Justin Trudeau at the Governor General’s residence, the Prime Minister’s Office confirmed to Radio Canada International.

That’s expected to be the only meeting between the two leaders during the four-day visit to Canada by Prince Shah Karim Al Hussaini Aga Khan IV, an official at the PMO said.

Trudeau’s ties to the Aga Khan came under close public scrutiny in the House of Commons and the media last year after it emerged that Trudeau spent a week-long New Year’s vacation at a private island in the Bahamas owned by the well-connected philanthropist.

In addition to Trudeau and his family, other guests at Bell Island included Liberal MP Seamus O’Regan and his husband Stelios (Steve) Doussis as well as party president Anna Gainey and her husband Tom Pitfield.

Former U.S. Secretary of State John Kerry was also guest of the Aga Khan on the island and Trudeau said they discussed the then-incoming Trump administration.

The Aga Khan is the founder and chairman of the Aga Khan Development Network that has received millions of dollars from the Canadian government for international development work.

In December 2017, federal Conflict of Interest and Ethics Commissioner Mary Dawson found that Trudeau broke the federal ethics act by accepting the trip.

Dawson also reprimanded Trudeau for accepting a ride to the island on the Aga Khan’s helicopter, and not recusing himself from discussions that could place him in a conflict of interest, as the Aga Khan’s foundation was registered to lobby Trudeau at the time.

Canada is home to over 80,000 of Ismaili Muslims that came to Canada in the 1970s to escape Ugandan dictator Idi Amin’s rule. There are now over 60,000 Ismaili Muslims in Canada.

Following the reception in Ottawa, the Aga Khan will then continue his visit to Canada, travelling to other parts of the country, including Vancouver and Calgary, Global Affairs Canada said.