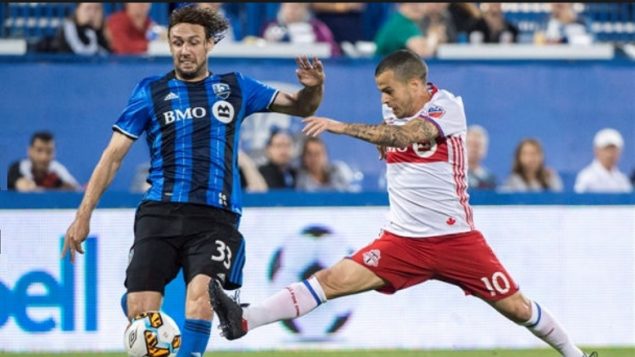 Two of Canada's MLS teams, Toronto and Montreal battle it out in the MSL Canadian Championship in 2017. They'll be facing competition for fans from the Canadian Premier League- billed as "all-Canadian" starting in spring 2019. Photo: via CBCsports

It is to all extents and purposes, “the” major worldwide sport.

Soccer, or football as it more widely known, has been somewhat in the shadows in terms of professional sports in North America.

In spite of that an ambitious new football project is set to start up in 2019, called the Canadian Premier League.

David Clanachan is the commissioner of the CPL.

There’s a furious pace as organisers get everything ready for what should be an 8 or 10 team league across Canada in time for the start of a 2019 season.

It will in some ways be facing competition from two other leagues.

The “new” North American Soccer League followed an initial effort that operated from 1968 to 1984, and a later NASL that ran from 2009-2011.  There are no Canadian teams in the NASL.

Clanachan is confident that with Canada’s diverse culture with so many people coming from countries where soccer is the main sport, there will be plenty of support for the CPL.

Logos for the new Canadian league. According to a media release the logo.”inspired by the North Star, the central icon acts as a guiding light for soccer in Canada. The star is surrounded by additional elements that make up Canada including the land, coasts, sky and a maple leaf. The official colours in the logo – “Pitch Green”, “Sky Navy” and “Ocean Blue” – reflect our cultural mosaic as seen through the colours in the Northern Lights. An honoured red version of the emblem will be used by the league and clubs during special occasions including Canada Day and when clubs play in the CONCACAF Champions League and Canadian Championship. Image :CPL

He also says the interest will come because it’s an all-Canadian effort, unlike the three current professional Canadian teams which play in the American MSL.

Confirmed teams will be in Hamilton, Ontario near Toronto, and Winnipeg Manitoba, along with probability of Halifax Nova Scotia, and Edmonton Alberta. He also says there’s room for CPL teams in the other professional markets of Montreal and Vancouver.

The other attraction he hopes, is that the majority of the players, if not all, will be Canadian. For the moment he does not see big name European players being hired, and says they are intent on fostering and promoting Canadian players.

In fact in promoting the new league, one of the statements is that the new coming league is “for Canadians, by Canadians”.