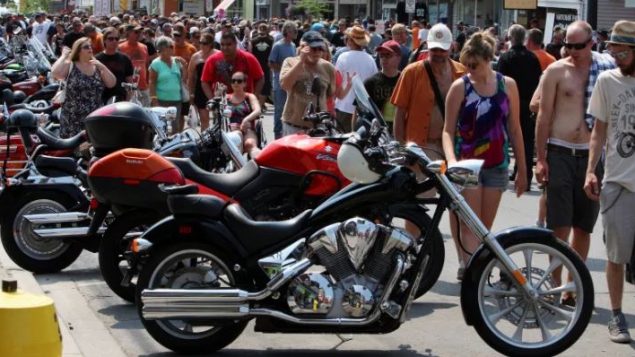 Friday July 13, 2012: people enjoying the good weather and the tradition in the small town of Port Dover, Ontario, on the shores of Lake Erie, taking part in the last BikeFest of that year. (Dave Chidley/CP)

Friday the 13th brings bikers, thousands and thousands of them, to the tiny town of Port Dover in Ontario.

Police estimate about 140,000 people, most of them with their bikes, will be milling about the Lake Erie community today.

They come from all over North America and even Europe.

“The little party that grew”

It’s a tradition that began in 1981, with Chris Simons, then the owner of the Biker’s Delight shop in Port Dover. 135 kilometres southwest of Toronto 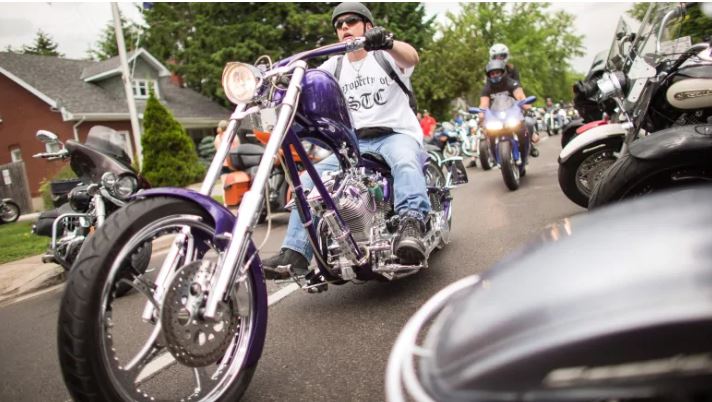 Friday the 13th of July is warm and sunny in Port Dover today. Above a motorcyclist tours through the centre of town during the celebrations on Friday, June 13, 2014. (Geoff Robins/CP)

He and a group of about 25 friends  had such a great time at a local hotel on Friday November the 13th, they decided to continue.

In an interview with the CBC’s Rick Mercer, Simons described it as “the little party that grew”.

Lots of characters, like Thong man and Kowa-Zebra Lady never miss an occasion to park among the Harleys and Hondas, and even the Yamahas and Suzukis.

This time next week Port Dover will be back to its usual population of about 6,500 people.