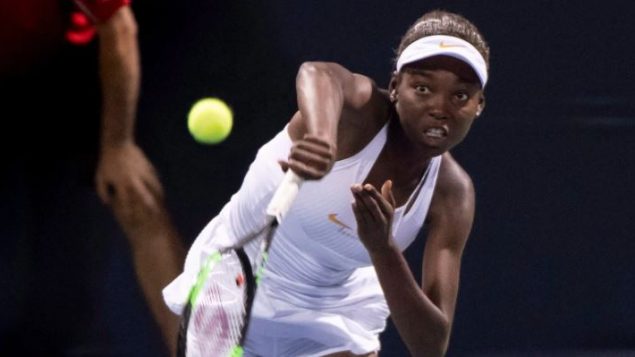 Rogers Cup Tennis: just one Canadian in third round

Rogers Cup play has provided a spotlight on some of the youngest ones to watch in Canadian tennis.

In Montreal, at the Women’s tournament, while Genie Bouchard struggled with blistered feet, and ultimately lost to Belgium’s Elise Mertens, she played hard.

Then it was the 20year-old Francoise Abanda, who emerged onto the court to face U.S. Open champ, third-seeded Sloane Stephens.

“Next time I will know how to manage the match better”

This was after Abanda, ranked 191st, got a wild card entry when Bianca Andreescu of Mississauga, Ontario, withdrew with an injury.

Abanda went on to defeat 44th-ranked Kirsten Flipkens in the first round.

In the second round, Sloane Stephens, who Abanda looks up to, proved a more formidable opponent.

“I didn’t think I had the right strategy, but Sloane is a player who can attack really well and defend really well,”  Abanda told CBC News.

“It was the first time (I’ve played a top-five player), but she plays against the top-10 players every week. I don’t,” Abanda said.

“I’m not in the same position. It was a good match for me to have more experience. Next time I will know how to manage the match better.” she said.

“She definitely was making me run, putting on a lot of pressure.”

Meanwhile in Toronto, at the Men’s tournament, there was the amazing breakthrough of Montreal’s Felix Auger-Aliassime, beating No. 18 Lucas Pouille of France in straight sets on Tuesday, in just the second Masters 1000 win for the 133rd-ranked Auger-Aliassime.

Yesterday, however, competing on his 18th birthday, Auger-Aliassime ended his run with a three-set loss to Russian qualifier Daniil Medvedev. 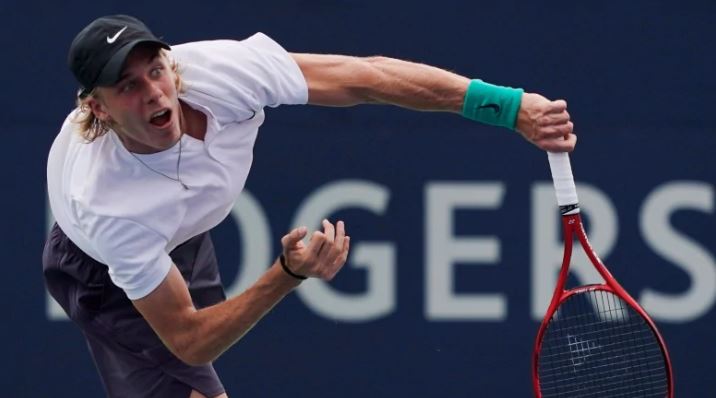 Rogers Cup star, Canada’s Denis Shapovalov delivers a serve, during his 6-3, 7-5 win over Fabio Fognini of Italy at the tournament in Toronto yesterday. (Mark Blinch/CP)

Denis Shapovalov, now the highest ranked Canadian at No. 26, was the only Canadian to advance to the third round of the Rogers Cup by defeating the 14th-seeded Italian Fabio Fognini 6-3, 7-5

The match had been delayed for hours and interrupted in the first set by heavy rains.

Shapovalov stepped into the spotlight last year with his stellar run at the Rogers Cup in Montreal that ended with a semifinal loss to eventual champion Alexander Zverev.

Shapovalov will now take on Robin Haase in the Round of 16, weather permitting.