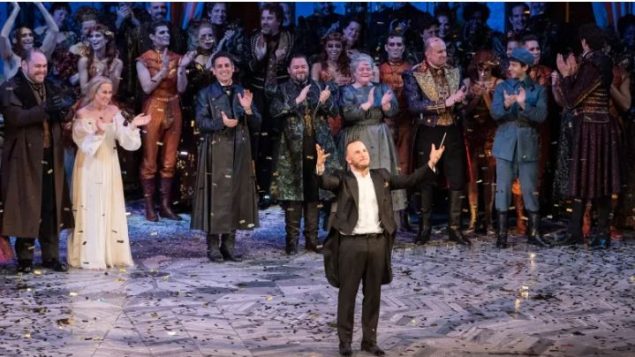 Yannick Nezet-Seguin’s debut at the Met

Yannick Nezet-Seguin shared the credit Tuesday night, bringing the entire orchestra up onstage to take a bow following the premier of the Met’s La Traviata.

It was his first performance as music director, in the storied Metropolitan Opera’s 135-year-history. He is just the third person in that position over all this time.

The 43-year-old Canadian was born in Montreal where he began studying piano at the age of five.

His mother, Claudine Nezet, told an interviewer once that originally Yannick had wanted to be pope, but decided the road was too long.

At ten he had decided to become an orchestra conductor.

On Tuesday night he took his new place at the podium for the premiere of the new production of Verdi’s La Traviata.

In an interview with Rupert Chandler earlier this year, Nezet-Seguin described his feelings about his position this way:

“I guess I always feel that I have done my job right if the musicians are happy and able to give their best. We have to remember that we are there to give some beauty and comfort back to the world, and as a conductor you’re there to give this to those you conduct, so they in turn can offer it to the audience.”

Described as a cat lover and total fitness buff, Yannick is widely loved by many.

Certainly the audience members Tuesday night may appreciate him a little more.

They were all sent home with complimentary bottles of ‘Vintage Yannick’ Prosecco to commemorate Night 1 of the Nézet-Séguin era.

Perhaps more Canadians will be filling the seats in the Met to see this “beauty and comfort” in action.