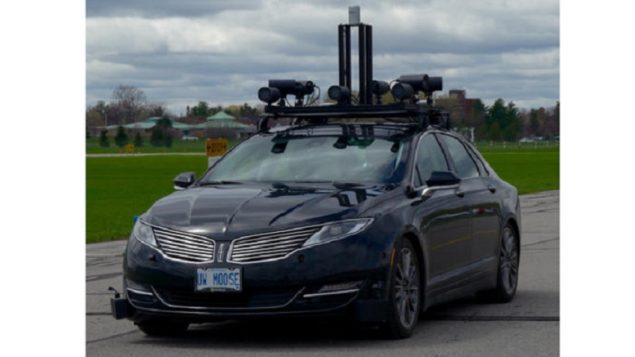 University of Waterloo's testing platform for autonomous technology, a Lincoln MKZ which they have nicknamed "autonomoose" (U Waterloo)

Fully autonomous vehicles to be allowed on Ontario roads.

If you’re driving along and you pass a car beside you with no-one inside driving, you just might be in Ontario.

The new law also allows for “level 3” automation on the road once those cars become available to be purchased. Some of these vehicles with a higher level of automation are available in selected countries in Europe.

Level 0 – No Automation: No automated features.

Level 1 – Driver Assistance: Intelligent features add layer of safety and comfort. A human driver is required for all critical functions.

Level 2 – Partial Automation: At least two automated tasks are managed by the vehicle, but the driver must remain engaged with the driving task.

Level 3 – Conditional Automation: The vehicle becomes a co-pilot. The vehicle manages most safety-critical driving functions but the driver must be ready to take control of the vehicle at all times.

Level 4 – High Automation: The vehicle is capable of performing all driving functions under certain conditions. The driver may have the option to control the vehicle.

Level 5 – Full Automation: Vehicle is capable of being completely driverless. Full-time automated driving in all conditions without need for a human driver.

Ross McKenzie, the managing director of the Waterloo Centre for Automotive Research (WatCAR), quoted by the CBC says, “At a full level three, you don’t need your hands on the wheel and a foot on a pedal, so it uses a lot of technologies and it’s anchored by adaptive cruise control … and lane keeping technology,”

As of yet level-3 vehicles are not available in Canada. The reason for the change in law comes from the provincial government’s desire to  position Ontario as a leader in the technology by removing some of the restrictions to testing and development.

Currently automated technology is being tested as part of a ten-year provincial pilot programme. The new law will allow testing of vehicles up to level-5, which is a vehicle that is completely driverless in all conditions.

Such technology may be still some distance in the future,  Uber, one of Ontario’s pilot programme participants, was involved in a deadly accident with an autonomous vehicle in March last year in Arizona.  Apparently the technology did detect something in its path six seconds before impact. It first identified it as an unknown object, then a vehicle, and l at the last second a woman and bicycle in its path. At one second before impact, it determined emergency braking was needed, but Uber had disabled that function, to prevent “erratic behaviour” presuming the operator behind the wheel would be watching and take over when needed. Uber had also disabled the vehicle’s own OEM automatic emergency braking so as not to conflict with its automated technology.  The lesson is that automated technology appears not yet able to fully replace humans and detect all the possible situations, while humans may be expected the technology to do more than it can. The driver involved said she was not watching the road at that moment, but rather looking at the driver interface in the centre console.