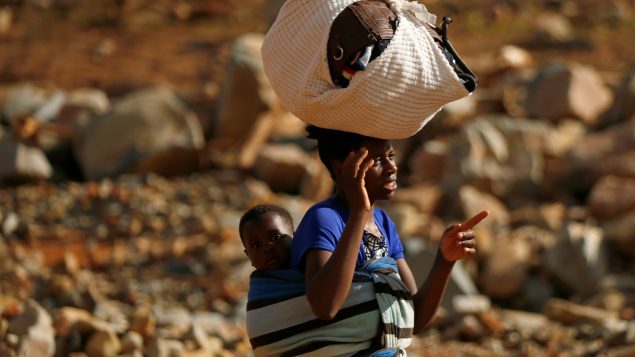 A survivor of Cyclone Idai carries her baby as she moves to higher ground at Ngangu suburb in Chimanimani, Zimbabwe, March 22, 2019. (Philimon Bulawayo/REUTERS)

A coalition of Canadian humanitarian groups is urging Canadians to show their generousity and donate to a federal matching fund for relief efforts in three southern African countries hit by Tropical Cyclone Idai last month.

Ottawa pledges to match donations made by individual Canadians to Canada’s Humanitarian Coalition and its members between March 15 and April 14, 2019, up to a maximum total of $2 million for relief efforts in flood-hit Mozambique, Malawi and Zimbabwe.

Melanie Murphy, safety lead with CARE Canada, who has just returned from Zimbabwe after spending two weeks in the southern African country following the devastating cyclone, said the need is immense.

The cyclone hit Zimbabwe’s mountainous Manicaland province around 10 pm local time on March 15 and it lasted for about three hours, she said.

The cyclone caused flooding and deadly landslides, particularly in Chimanimani district, where huge boulders rolled down the mountain slopes and leveled houses and everything in their path, Murphy said.

“This was night time and most of the villagers in this area were asleep,” she said. “They really didn’t have time to react.”

Many of those who managed to escape their houses were swept away by the torrential flood waters, Murphy said.

“Some of their bodies were found as far away as Mozambique while others are still missing,” Murphy said. 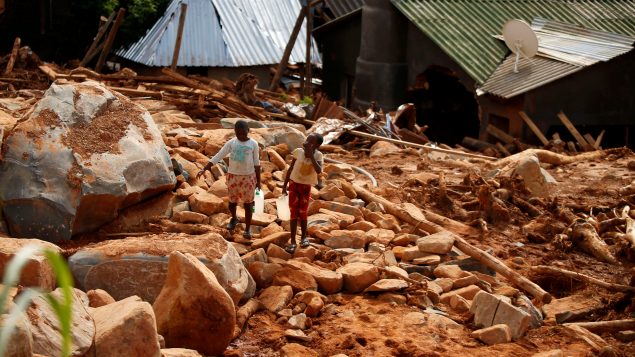 Cyclone Idai hit an already highly impoverished part of the country. The Chimanimani and Chipinge districts of Manicaland were the hardest-hit, with at least half of the population there affected by the flooding and landslides.

According to preliminary reports by the United Nations Office for the Coordination of Humanitarian Affairs (OCHA), more than 10,000 people are living in improvised camps, in public buildings (schools and government buildings), in transit camps and with host families in several districts.

The government of Zimbabwe reported 299 deaths and more than 300 people are still missing.

In Mutare, the cyclone destroyed 584 houses and damaged 1,263 houses. More than 2,200 houses were damaged in Buhera district.

These numbers are likely to increase as more areas become accessible in the hardest hit districts.

“A week and a half after this, when I was there, there were still people out trying to dig for their missing family members,” Murphy said. “It was one of the most heart-wrenching things I’ve ever seen, and I’ve been part of many emergency responses.” 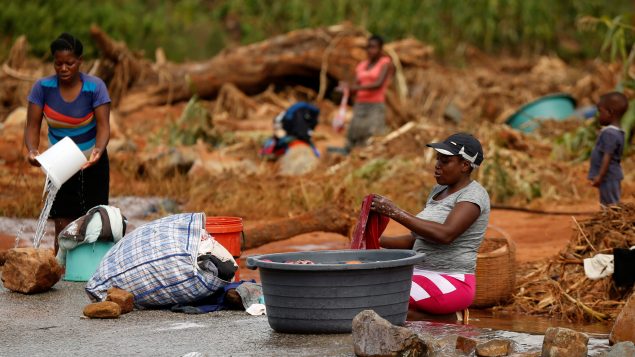 Women wash clothing in the river as they clean up after Cyclone Idai in Chimanimani, Zimbabwe, March 22, 2019. (Philimon Bulawayo/REUTERS)

CARE was one of the first humanitarian groups in Chimanimani and their team began immediately working with community leaders to identify the most vulnerable families and people in need, Murphy said.

“We’ve been distributing life-saving supplies that help with accessing clean water,” she said. “There has been a really extensive damage to the water supply and any time that happens we really worry about diarrheal diseases and cholera, in particular, which has already hit the affected communities in Mozambique.”

So far CARE has reached more than 6,000 people with its emergency response efforts in Zimbabwe, said Darcy Knoll, a spokesperson for CARE Canada.

CARE teams on the ground in Chimanimani and Chipinge provided water purification tablets, jerrycans for clean water and other water, sanitation and hygiene products, Murphy said.

“When I was there, I attended the distribution of dignity kits,” she said. “These are kits that we give to adolescent girls and women that have menstrual hygiene items in them.” 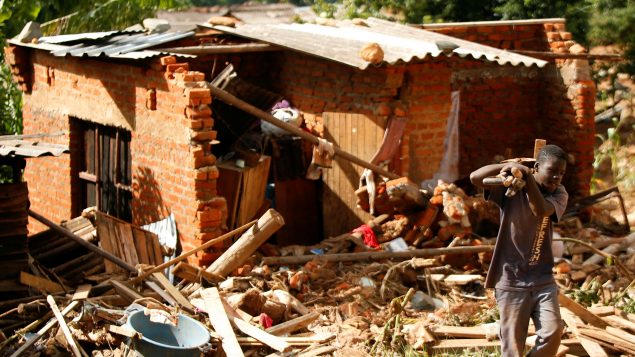 A man collects tools and supplies as walks away from houses destroyed by Cyclone Idai in Chimanimani, Zimbabwe March 22, 2019. (Philimon Bulawayo/REUTERS)

Thousands of families in Zimbabwe need emergency housing, she said.

There has also been significant damage to crops, livestock and infrastructure including roads, bridges, water installations, power and communication systems.

“This is one of the largest natural disasters to hit southern Africa in many-many years,” she said.

The United Nations has requested additional $60 million US as part of its Zimbabwe Flash Appeal to help 270,000 people cope with the aftermath of Cyclone Idai.

That’s in addition to the original appeal, which was requesting $234 million US to reach 2.2 million in dire need of food, water and sanitation because of the devastating effects of the drought that hit parts of Zimbabwe prior to the cyclone.

To date, the appeal remains over 90 per cent underfunded.