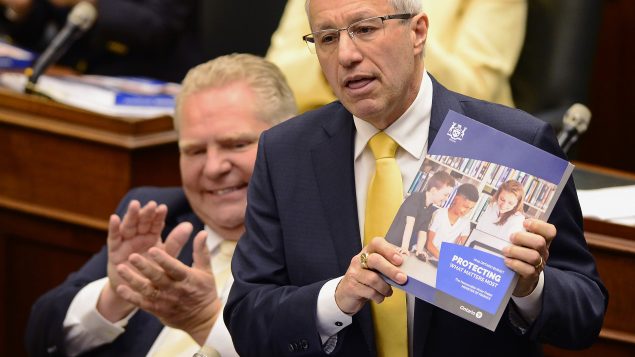 Canada’s largest province won’t have a balanced budget for the next five years, but Ontarians will have to get used to some gradual fiscal belt-tightening even as the provincial Progressive Conservative government relaxes Ontario’s restrictive alcohol rules.

The budget presented in the provincial legislature in Toronto Thursday sets Ontario’s current deficit at $11.7 billion and the Tories announced that they don’t expect to balance the books until 2023-24.

The $163.4 spending bill contains some spending cuts – notably to post-secondary education and social services – but not as drastic as some feared.

“We have developed a reasonable path to balance,” Finance Minister Vic Fedeli said. “Our path to balance in five years is a thoughtful and a measured approach to take…Our entire premise is to protect what matters most.”

Among big spending announcements by the government of Premier Doug Ford was the introduction of the Ontario Childcare Access and Relief from Expenses (CARE) tax credit for families with low to moderate incomes.

The government is also pledging up to $1 billion over the next five years to create 30,000 new child-care spaces.

Free dental care will also be provided for low-income seniors.

The government also intends to allow the sale of beer and wine in convenience stores. Currently beer and wine can only be bought in specialized liquor stores.

Ontario is also getting a redesigned licence plate with a new motto: A Place to Grow instead of the current Yours to Discover.