Atikamekw maple syrup: an ancestral tradition passed on with passion 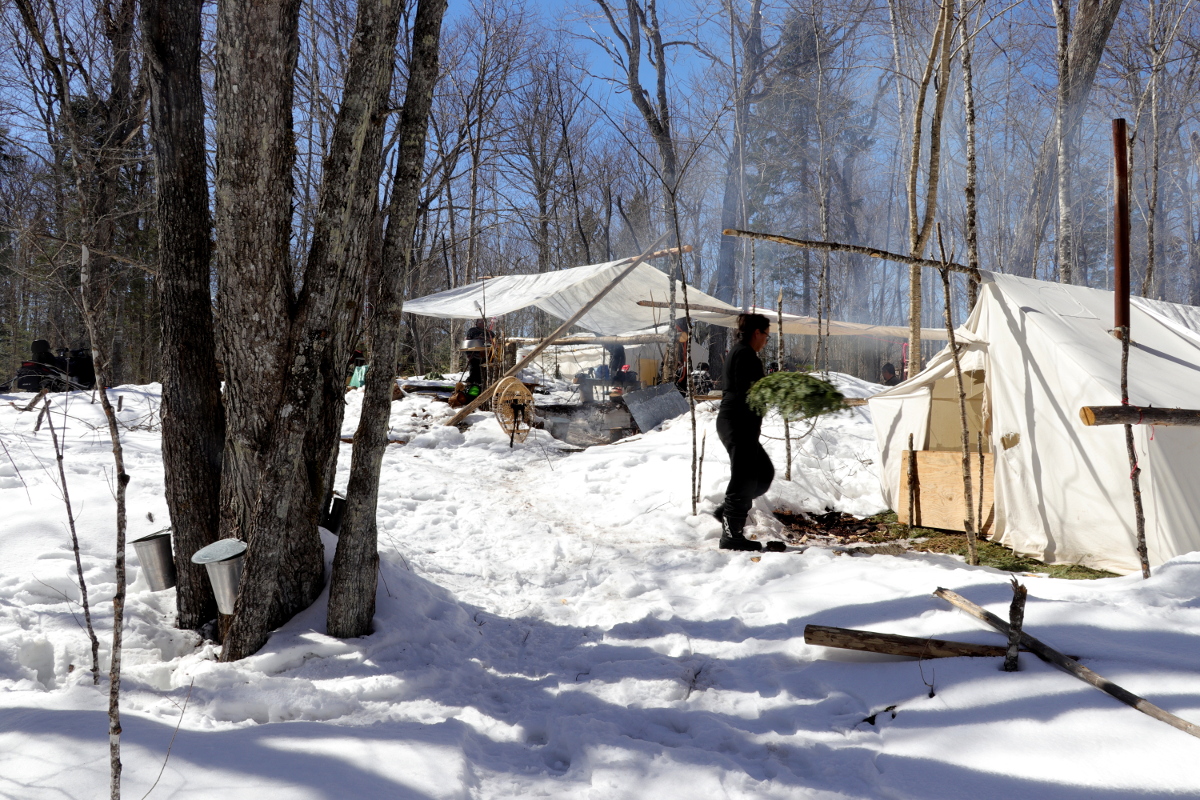 In Yann Flamand’s maple grove in Manawan, the tradition continues with the unwavering support of friends and family. All photos are from RCI/Marie-Claude Simard

When Jean-Paul Echaquan talks about his grandfather who left Manawan every spring to go to the forest to collect maple sap, time stops. Suddenly, we see ourselves half a century earlier following the old Atikamekw in all the stages of production of the precious syrup, as young Jean-Paul did at the age of 5.

“I would always join my grandfather in his sugar bush [natural forest where sugar maples grow and where the  maple sap is harvested]. I saw him working all the time, that’s how I learned, that’s how he passed on the knowledge to us. I was very young, and already I had the strength to carry the maple water,” he explains. 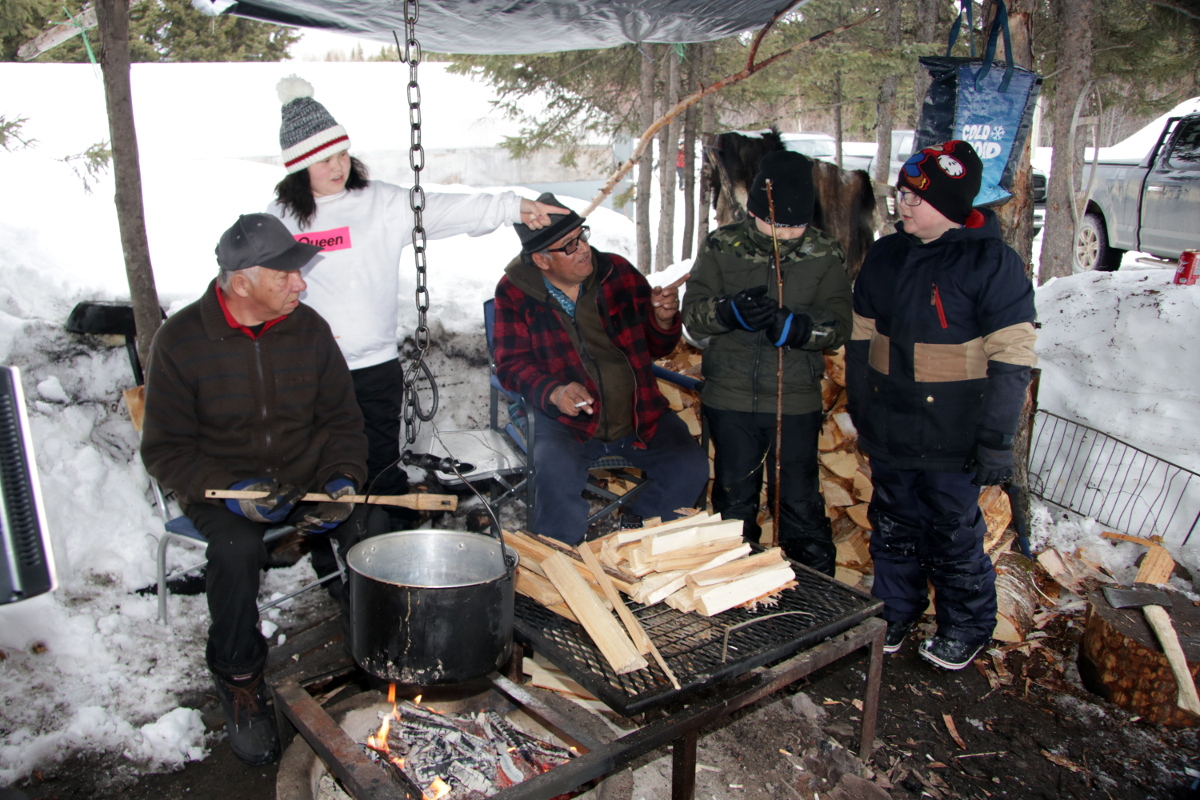 Today, Jean-Paul Echaquan is passing on the knowledge and tradition of his ancestors to the youth of Manawan, an Atikamekw community located in the Lanaudière region of Quebec. More than 2000 Atikamekw live in this community accessible only by an 86 km unpaved forest road north of Saint-Michel-des-Saints. They speak their own language, Atikamekw.

During sugar-making season in April, Mr. Echaquan and other elders welcome elementary and high school students to the “sugar tent”, located 10 km from Manawan, not far from the main road. Here, students learn about tradition while enjoying the maple taffy. 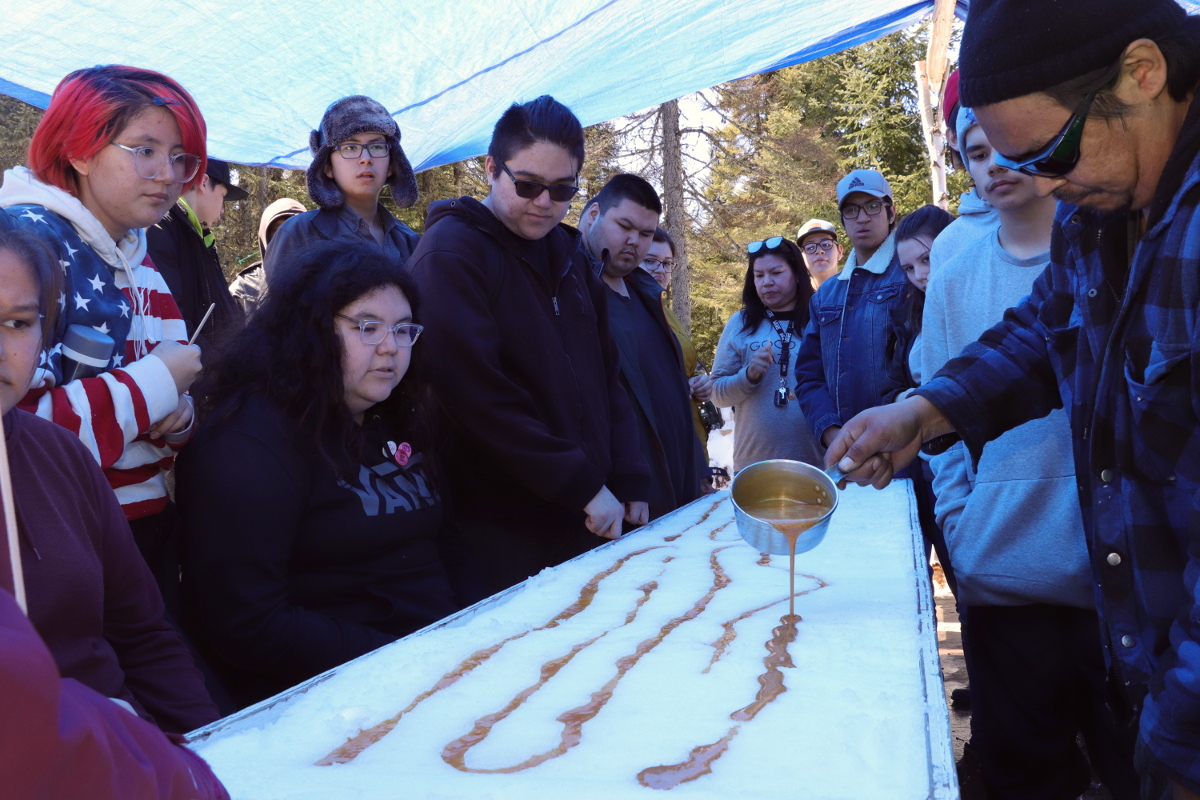 Students from the Manawan High School wait for the maple taffy to be ready to be eaten.

“My grandfather used to say all the time: ‘You should never waste this water, it’s very precious’,” he adds.

Jean-Paul Echaquan knows how much work it takes to collect this precious maple sap which has a water-like consistency.  With his partners, he collects the sap needed for the educational activities and gatherings at the sugar tent in the sugar bush located deep in the forest,

The maple tree is called “irinatikw” in the Atikamekw language. “Irinatikwapo” is the sap. 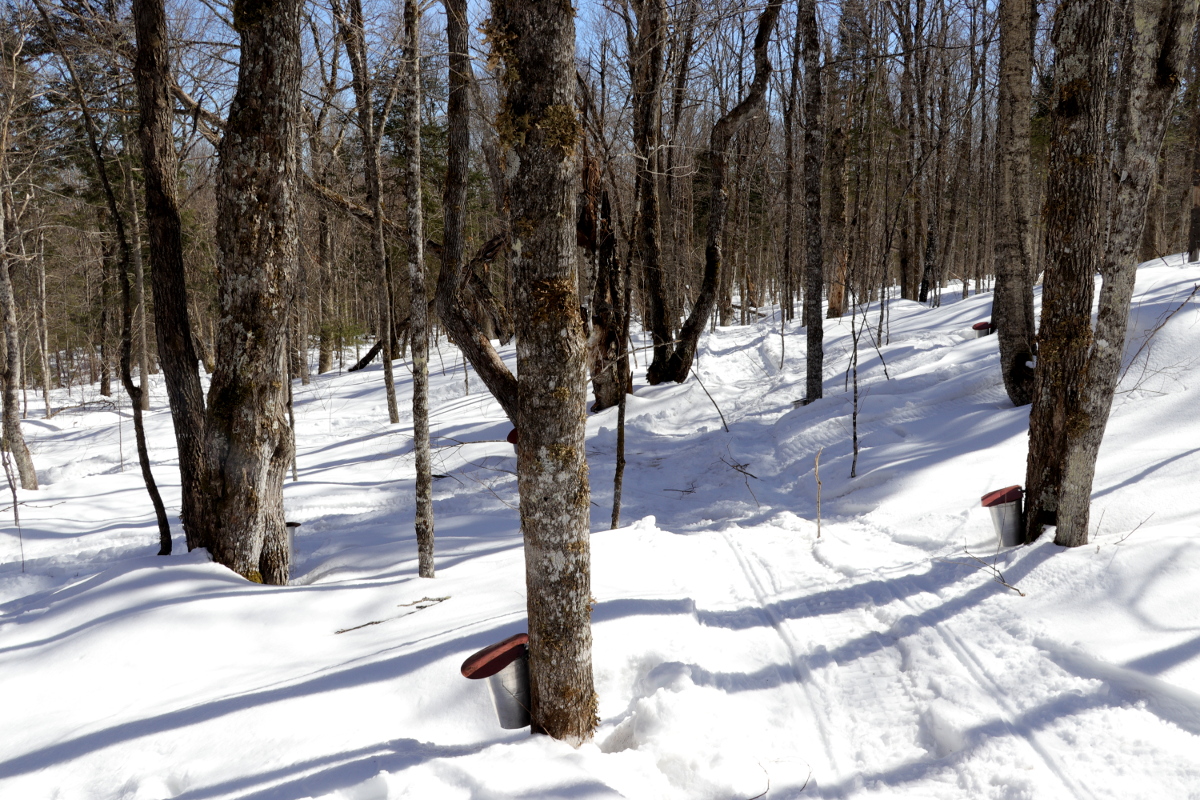 “Iriniw means Man. Irinatikw means a man or somebody who produces something, who works for the family, for the human being. Wapo means liquid. ” – Jean-Paul Echaquan

It is by observing animals that the Atikamekw, a very long time ago, discovered this sweet sap with great nutritional and medicinal properties. They noticed that when the squirrel or woodpecker, depending on the legends, made incisions in the bark, sweet drops would flow along the tree and harden in the sun.

“Our ancestors made holes in the maple tree so that the sap could flow easily. With a small container of bark, they collected the maple water,” he explains.

After a long process of evaporation by boiling the water over a fire, the sap became maple syrup and maple sugar. “We mixed the syrup with the meat, with our herbal teas. Just the sap has medicinal properties. It cleanses the digestive system, it gives a boost of energy.”

The “pierced spoon”, an essential tool to make the maple taffy 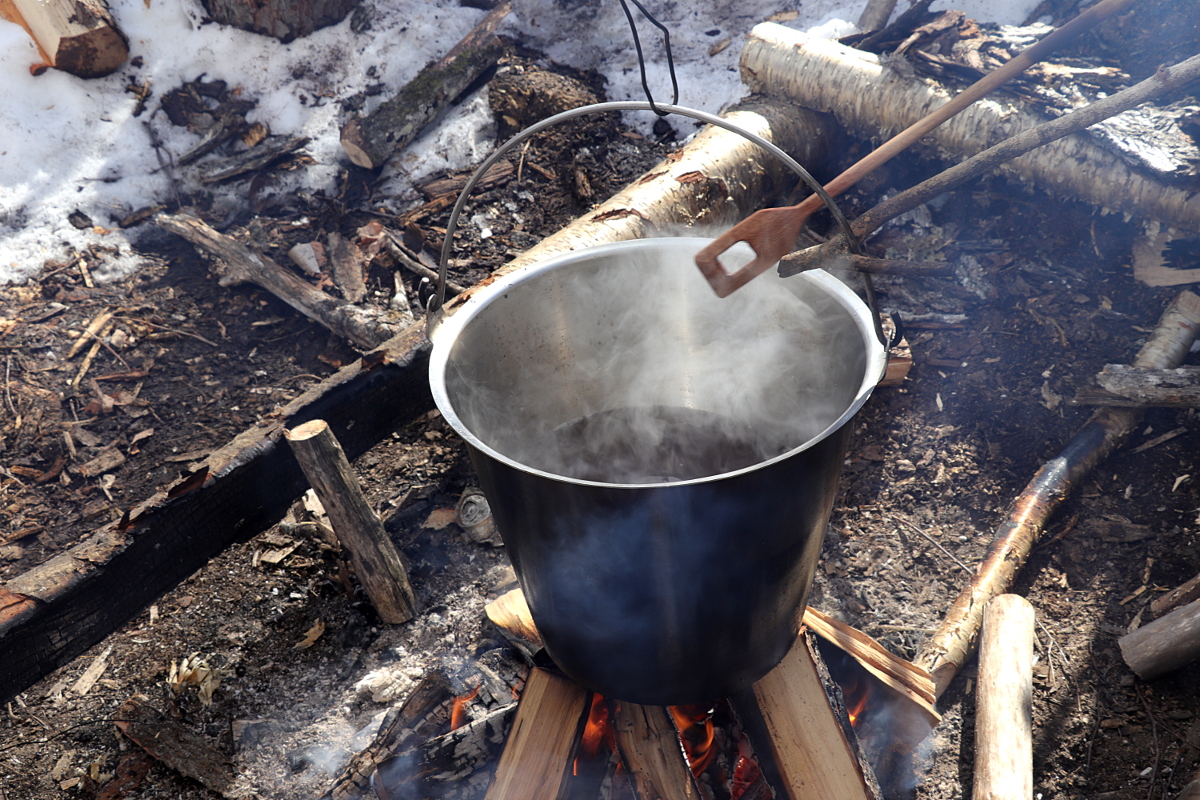 To make maple taffy the Atikamekw way, the syrup is cooked in a pot for about 45 minutes on a wood fire. The pierced spoon is used as a thermometer. When a bubble forms while blowing into the hole of the spoon, it indicates that the taffy is ready. When the bubble is even larger, after a longer cooking period, the syrup has reached the sugar stage and can be made into a sugar loaf.

When the taffy is ready, it is spread on the snow in long ribbons. Once it has cooled, it is rolled up on a stick and eaten like a soft lollipop. Yummy!

The Atikamekw have six seasons. Sikon, or pre-spring, is the right season for collecting the sap. The ideal moment is when daytime temperature rise just above the freezing point while at night the temperature drops just below freezing. This transition happens roughly from the end of March to the end of April.

“Sikon, it’s sugar-making season. It was during this period that our ancestors left the village to go in the forest, and would settle there for a few months to collect maple water, explains Jean-Paul Echaquan. Sometimes they waited for the ice to melt to come back.” 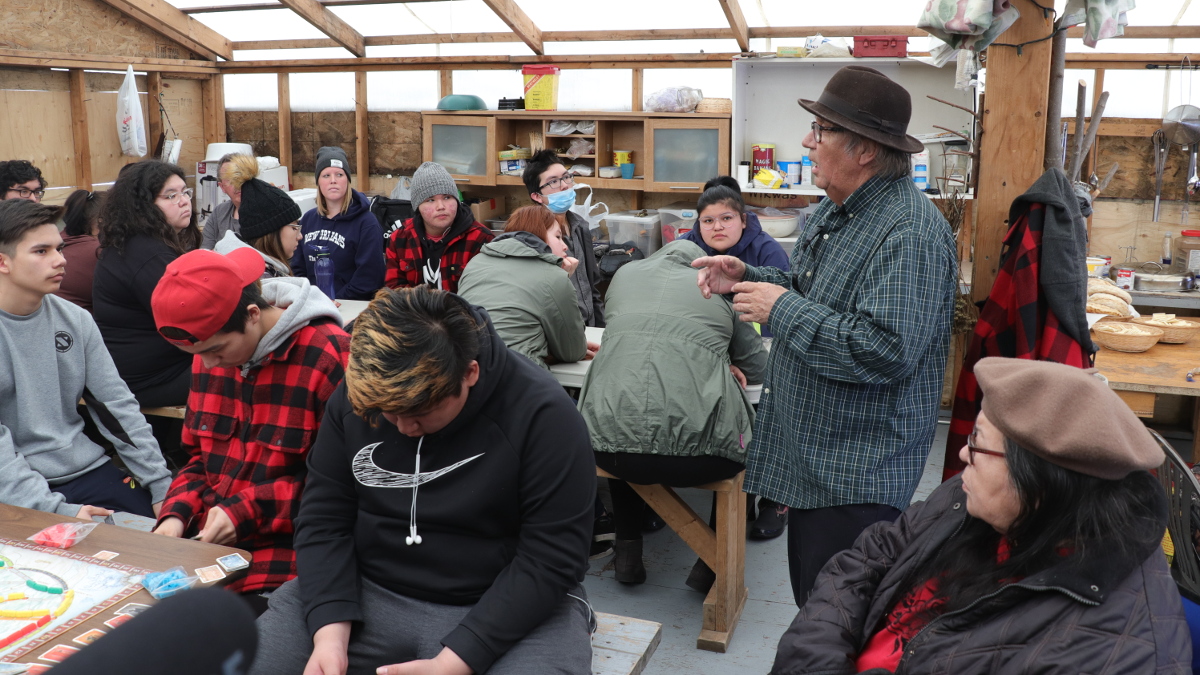 Elders Richard Flamand and Adrienne Niquay talk about the maple syrup tradition to the youth in the sugar tent.

Until the 1950s, the village was deserted during Sikon. “Each family went to their territory to produce syrup, but also to hunt and dry the meat,” explains Richard Flamand, another elder who welcomes the young people to the sugar tent.

“It was a production for the needs of the family and the community, but also, when the Hudson’s Bay Company was there, they took our sugar, he says. To preserve resources, our ancestors did not always go to the same place.”

“When they got their first loaf of sugar, they would put it in the middle of the lake as an offering to thank the water and the tree,” adds his wife, Adrienne Niquay. There was a lot of contemplation to do during the sugar season.”

Even today, 5 or 6 families still have an active sugar bush in the forest, and collect maple sap on their respective family territories, near Manawan. This is the case for Mr. Echaquan’s son, Yann Flamand, a young father who, with the help of family and friends is wholeheartedly involved in the traditional production of maple syrup. 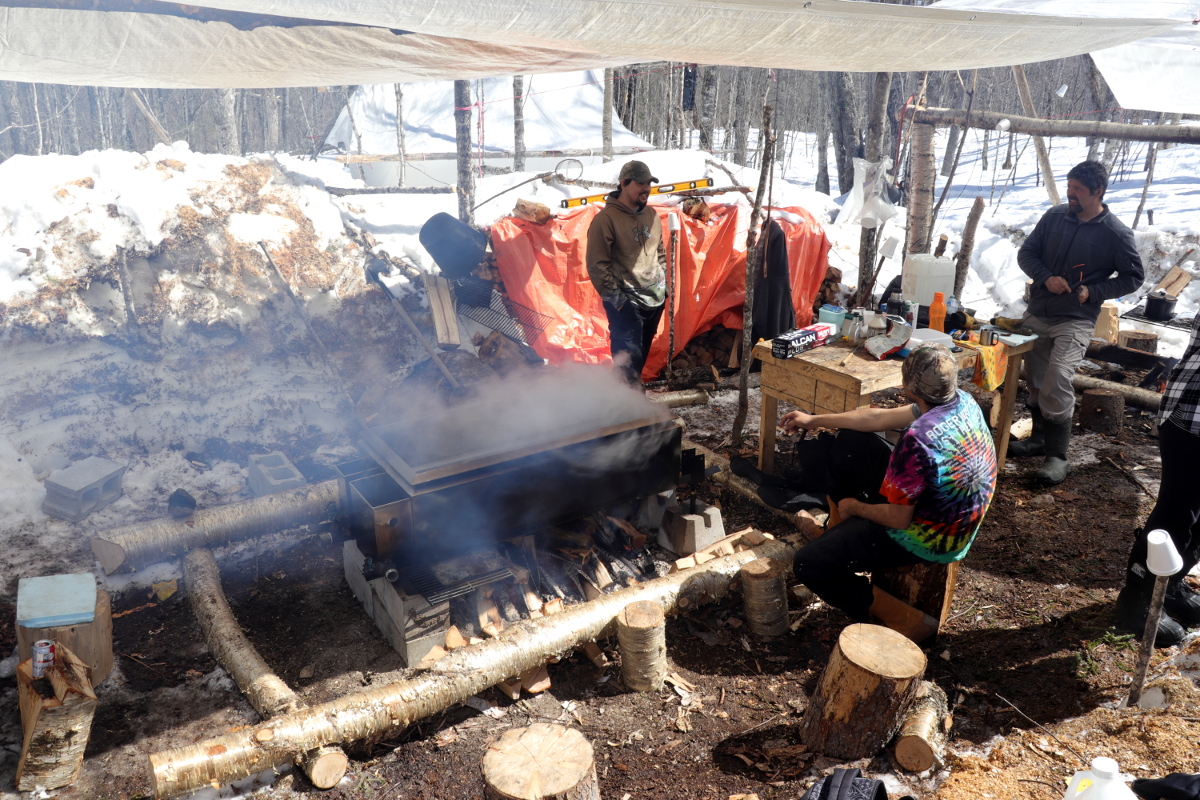 Yann Flamand (right), his brother Nipinik and Shayne Petiquay watch over the evaporation of the maple water that boils on a wood fire in a 40-gallon metal pan.

Sisipaskotokanan: the mountain where there are maple trees

There is no road to Yann Flamand’s maple grove. Only a snowmobile trail that goes into the forest from behind the Manawan arena. After a few kilometres, we arrive at Sisipaskotokanan, the mountain where there are maple trees, in English. It’s right there.

“We came here with my grandparents, I must have been 7 or 8 years old,” he explains. We used to go up the mountain on snowshoes. I thought it was really far away! We used to sleep here.”
Without electricity, far from the village, the site operates in calmness. A production tent is installed in the middle. Some 40 gallons (150 litres) of maple water boil quietly in an evaporator (big metal pan) set on a wood fire.

“Our grandfathers boiled the sap in large pots. We decided to try a metal pan, five or six years ago. We’re able to reduce a lot more sap water that way.” 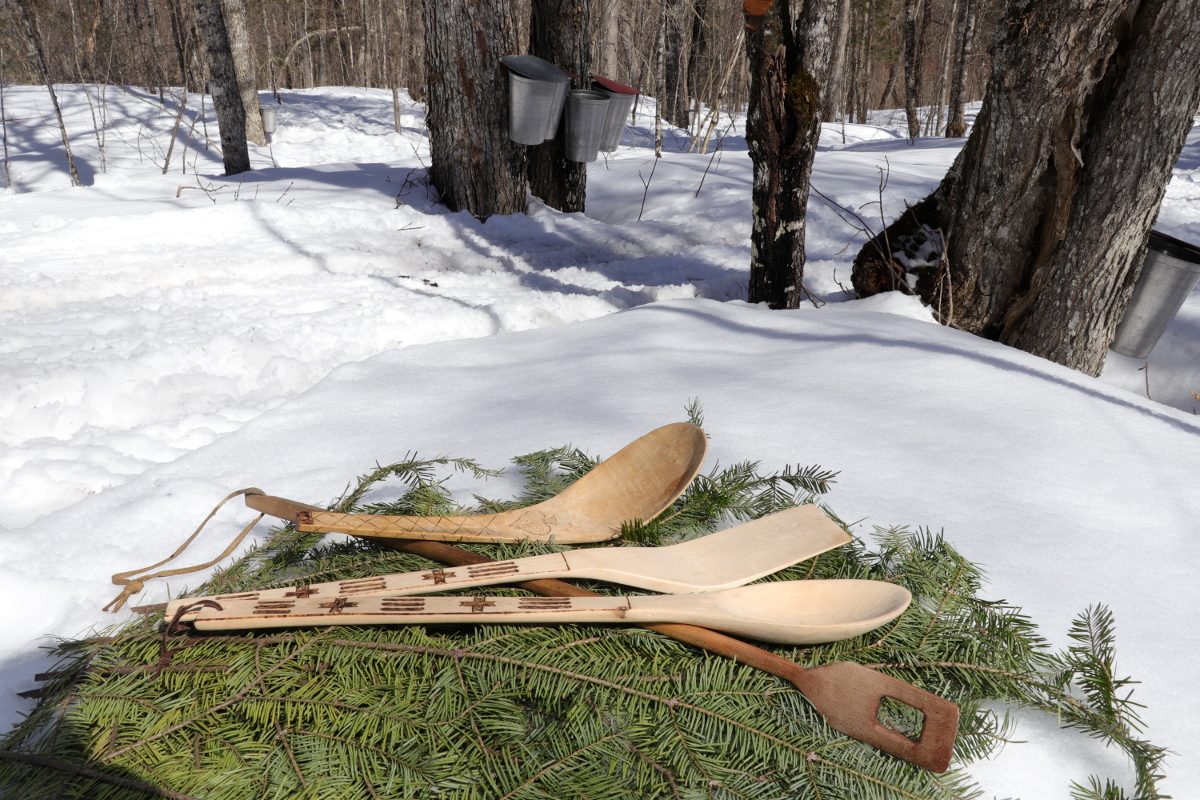 Woode tools made by hand by Yann and Nipinik’s grand-father.

The work begins several weeks before the sugar season.

“It’s a lot of preparation. You have to cut firewood, set up tents, make places where to set fires, make incisions in the trees, hang the buckets,” he says.

Fortunately, family and friends are also involved in the success of the operations. 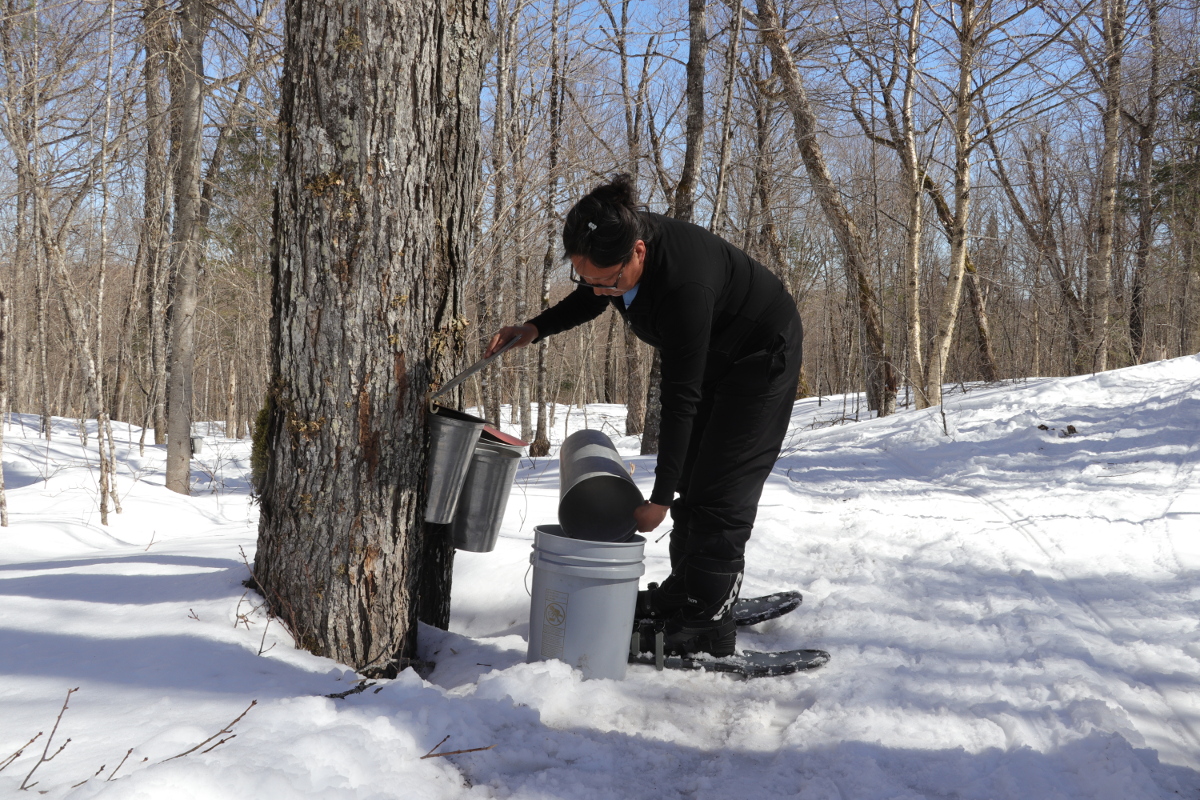 This year, 116 maples were tapped. From 120 to 180 litres are harvested daily. All this water is collected by hand, making regular rounds on snowshoes with large 18-litre containers.

The evaporation of all this sap is done entirely on wood fires. The 150 litre boil for about 7 hours. Then, the remaining liquid is poured into a big cooking pot where it cooks for another hour. It is precisely in this final phase that Atikamekw maple syrup takes on its full flavour.

“We are proud of our hard work and it shows in the taste of our syrup! “says a smiling Shayne Petiquay. 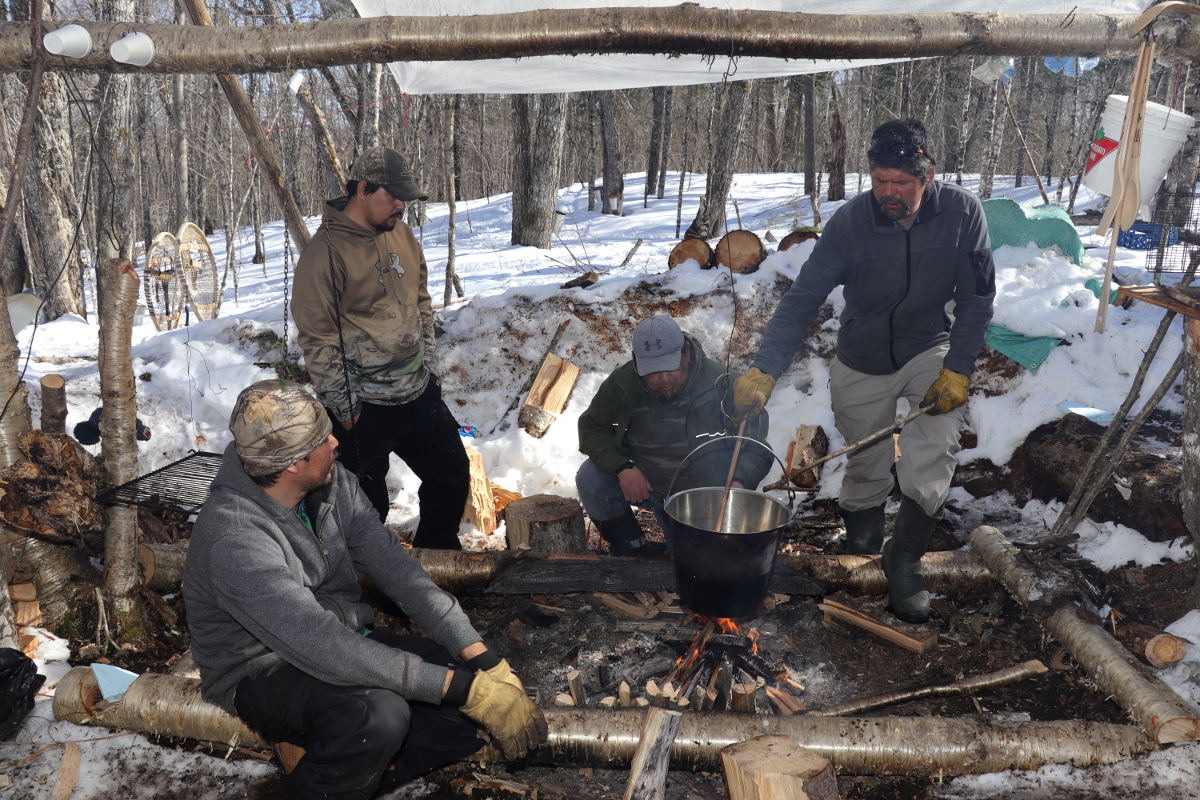 The smoke from the wood fire gives the Atikamekw maple syrup its unique flavour.

The taste of Atikamekw syrup stands out from commercial maple syrups, which seem too sweet and bland in comparison. Served in a tea made with maple water, it is a pure delight!

According to Yann Flamand, wood fire is a major factor. “The syrup tastes like smoke and fresh air. It is a maple wood fire that gives the syrup its best taste. »

Various avenues have been explored to market this product. For the time being, Yann does not wish to take this path. He believes that to comply with market standards, he will have to compromise the quality and taste of his syrup, which he refuses to do. 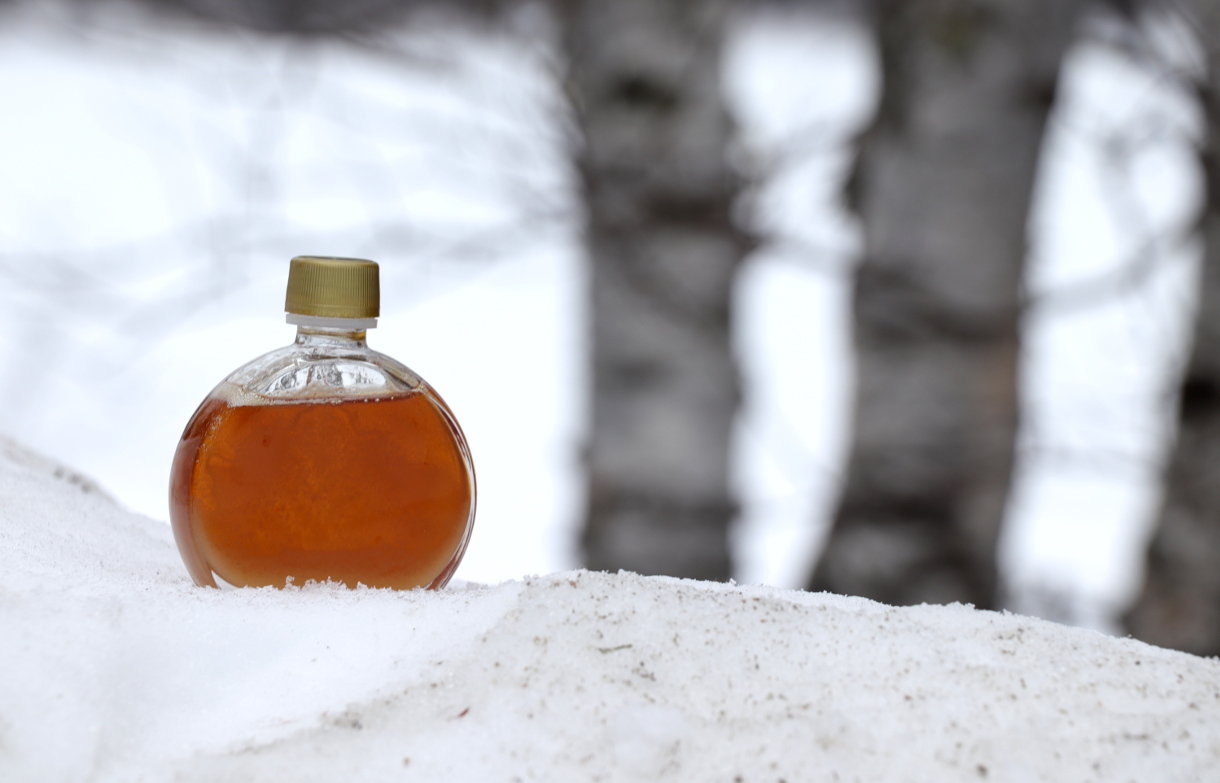 A small bottle of the precious Atikamekw syrup near the lake, in Manawan.

In the end, 150 litres of maple water will produce 4 litres of syrup, a ratio of 40 to 1. Roughly 30 litres will be produced this year.

A lot of energy is invested in the production of these precious litres. On top of all the hard work involved in the syrup production, Yann and his wife have to juggle with family responsibilities and their respective jobs in Manawan.

“It’s a passion for me, he says without hesitation. Maybe because when I was young I loved it so much to be with my grandparents in the woods. It’s a tradition I want to pass on to my children.” 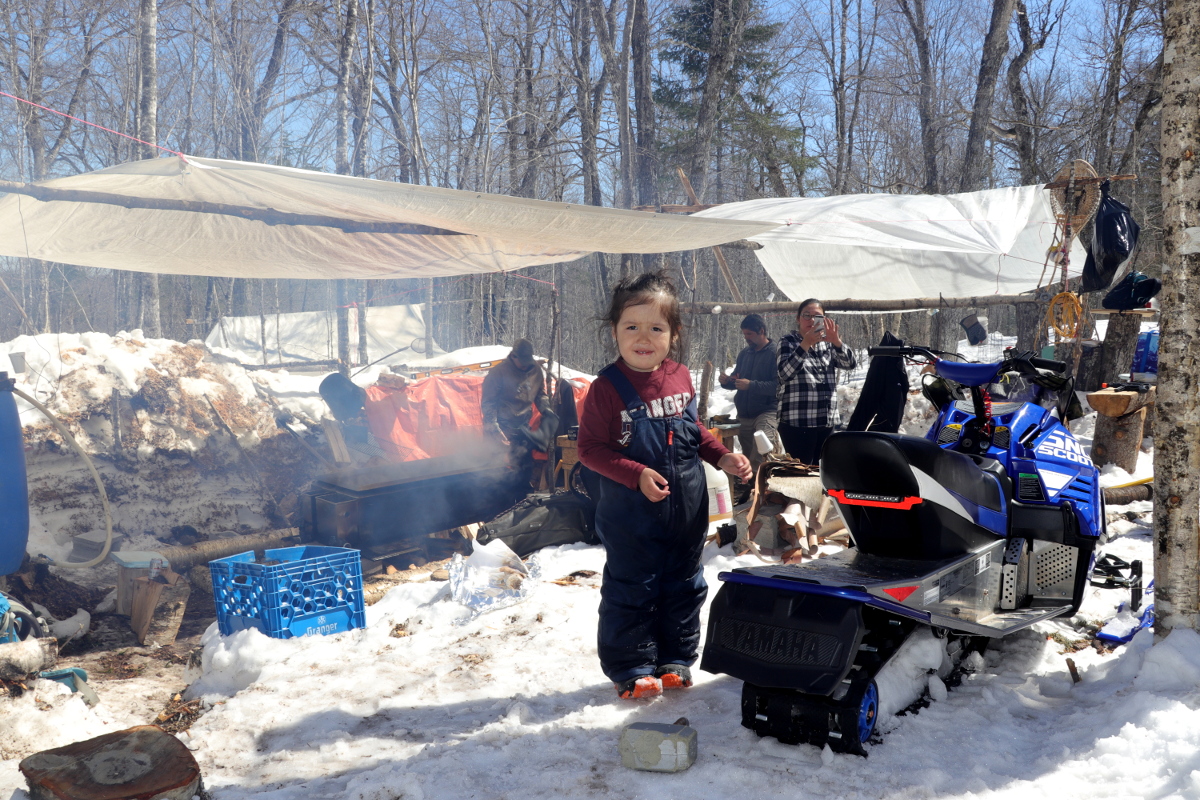 A passion that is passed on from generation to generation. All photos are from RCI/Marie-Claude Simard

Take a look at an Atikamekw sugar bush. Watch our video!