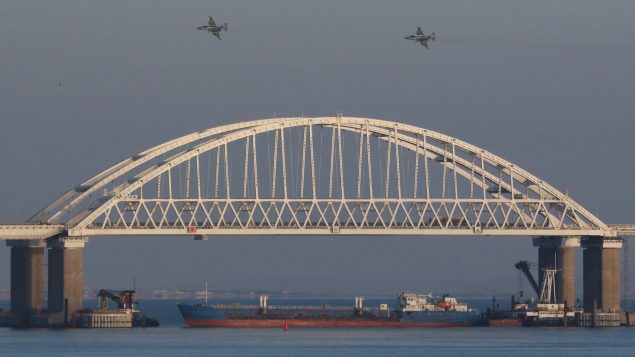 Russian jet fighters fly over a bridge connecting the Russian mainland with the Crimean Peninsula with a cargo ship beneath it after three Ukrainian navy vessels were stopped by Russia from entering the Sea of Azov via the Kerch Strait in the Black Sea, Crimea Nov. 25, 2018. (Pavel Rebrov/REUTERS)

Canada joined the United States and the European Union in imposing sanction on six Russian officials in Crimea over their involvement in local elections last fall in the Russian-controlled Black Sea peninsula that was part of Ukraine before Russia annexed it in 2014.

The Canadian sanctions, which were imposed under the Special Economic Measures Act, target the Kremlin appointed interim governor of Crimea, as well as local politicians in the strategic city of Sevastopol, home to Russia’s Black Sea Fleet ever since the city was founded on the orders of Russian Empress Catherine The Great in 1783.

“The coordinated U.S., EU, and Canadian designations limit the ability of these illegitimate officials to do business internationally and highlights the strength of the transatlantic alliance in standing up to Russia’s continued aggression,” U.S. Treasury Secretary Steven Mnuchin said in a statement.

Since Russia’s illegal annexation of Crimea in 2014, Canada has sanctioned more than 430 individuals and entities, many in coordination with its allies, Champagne said.