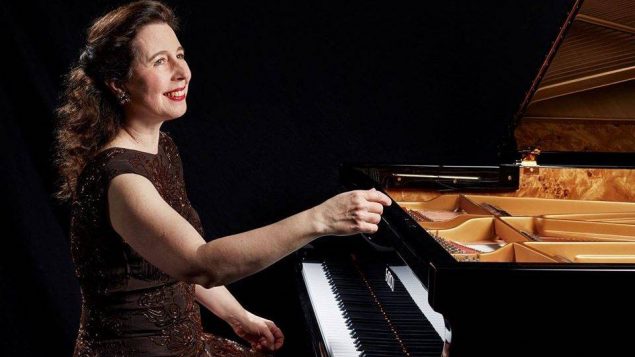 Canadian virtuoso Angela Hewit sits in front of her F278 Fazioli piano in this promotional photo posted by the famed Italian instrument maker on its Facebook page in April 2019. (Fazioli Pianoforti/Facebook)

Movers dropped the $194,000 US concert piano while taking it out of a recording studio, Hewitt revealed in a Facebook post.

“At the end of my most recent CD recording sessions (Beethoven Variations in Berlin), when I was so happy with the results and feeling elated, the piano movers came into the control room (where I was finishing up with my producer) to say they had dropped my precious Fazioli concert grand piano,” Hewitt, one of the world’s leading classical pianists, wrote.

“The iron frame is broken, as well as much else in the structure and action (not to mention the lid and other parts of the case).”

It makes no sense, financially or artistically, to rebuild this piano from scratch, she said.

“It’s kaputt,” Hewitt wrote. “The movers of course were mortified. In 35 years of doing their job, this had never happened before. At least nobody was hurt.”

Hewitt said the accident happened 10 days ago but she was in such a shock that she couldn’t share the news with her fans.

“I adored this piano. It was my best friend, best companion. I loved how it felt when I was recording–giving me the possibility to do anything I wanted.”