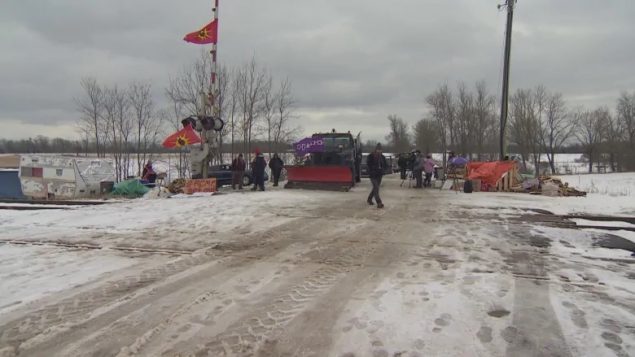 Mohawk protesters at one of two crossing near Belleville haven't physically blocked the tracks near Belleville, Ont., The protests have shut down rail and freight traffic at one of the busiest routes in Canada. (CBC)

Although the elected band councils have approved, the hereditary chiefs of the Wet’suwets’en in northern British Columbia are against a gas pipeline across their traditional territory

Other protests in sympathy continue to take place across the country.

In northern B.C. a group of Gitxsan First Nations have set up a barricade blocking a rail line. In Vancouver, protesters have occupied a major intersection in the city.  It is expected police will have to make arrests soon as the morning commute begins.

In southern Ontario near Belleville,  a group of Mohawk First Nations continue their occupation beside one of the country’s major railway routes. Although not physically blocking the rail line, both passenger and freight trains have been cancelled. This has caused great disruption for many thousands of passengers, and substantial expense for the rail line and commercial businesses.

Instead of moving, the Mohawk have set up another camp beside tracks at a second location.

It is unsure of what may yet transpire later this morning.