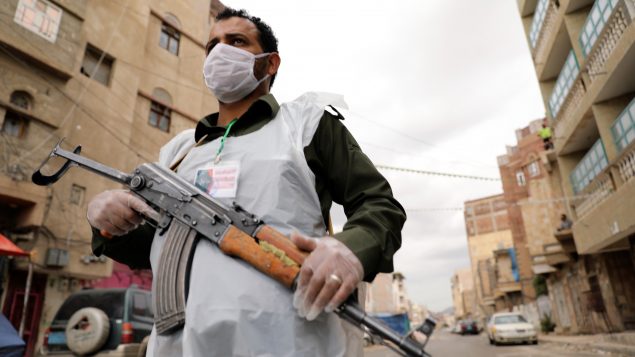 A security man wearing a protective mask stands on a street during a 24-hour curfew amid concerns about the spread of the coronavirus disease (COVID-19), in Sanaa, Yemen May 6, 2020. (Khaled Abdullah/REUTERS)

Canada is pledging $40 million in humanitarian aid for Yemen as the war-ravaged country deals with a deadly outbreak of COVID-19 in addition to a resurgence of cholera, dengue fever, malaria and diphtheria, International Development Minister Karina Gould announced Tuesday.

Gould made the announcement at an international pledging conference co-hosted by the United Nations and Saudi Arabia.

The virtual conference raised $1.35 billion US, far short of the $2.4 billion US organizers were hoping to raise for the underfunded humanitarian programs run by UN agencies and humanitarian organizations in Yemen.

“Yemen has the fourth highest number of displaced people in the world. And in the first half of 2020, it experienced once-in-a-generation flooding that devastated communities and led to widespread killer diseases such as cholera, dengue, malaria and diphtheria,” Gould told the virtual conference.

“Now, as COVID-19 threatens to compound the situation, we as donors and humanitarians must step up our efforts to avert catastrophe.”

‘A race against time’ 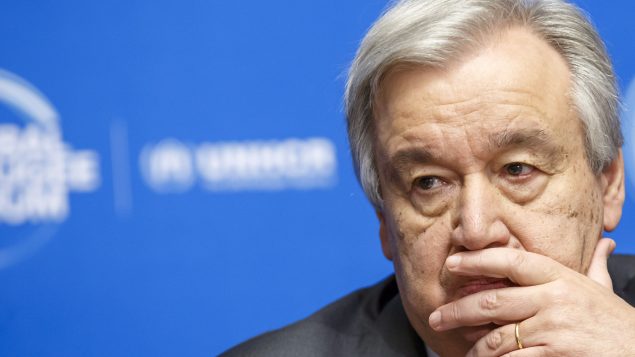 Addressing the pledging conference from New York, UN Secretary General Antonio Guterres said more than five years of conflict have left Yemenis “hanging on by a thread, their economy in tatters, their institutions facing near-collapse.”

Humanitarian agencies in Yemen are “in a race against time,” Guterres said.

“Unless we secure significant funding, more than 30 out of 41 major United Nations programs in Yemen will close in the next few weeks,” Guterres said.

Some 75 per cent of UN programs in Yemen have already had to shut their doors or reduce operations because of lack of funding. The global body’s World Food Program had to cut rations in half and UN-funded health services were reduced in 189 out of 369 hospitals nationwide.

Speaking on behalf of 37 international NGOs working alongside civil society organisations on the ground in Yemen, Audrey Crawford of Danish Refugee Council said due to funding shortages, humanitarian agencies are forced to slash payments to health workers, stop providing clean water, scale down sanitation services – all in the midst of a deadly pandemic.

‘A perfect storm of multiple crises’ 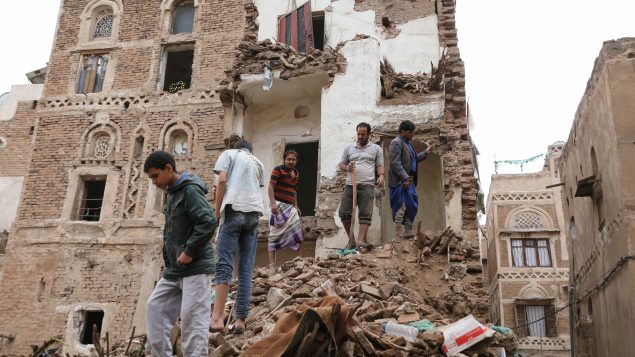 People stand on the debris of a house that recently collapsed due to heavy rains in the old quarter of Sanaa, Yemen May 3, 2020. (Khaled Abdullah/REUTERS)

In addition, humanitarian aid groups in Yemen have to take care of 280,000 refugees from Somalia, and 3.6 million internally displaced Yemenis scattered in makeshift camps across the country, Jean-Nicolas Beuze, head of the UN Refugee Agency (UNHCR) in Yemen, told Radio Canada International.

The humanitarian response to the COVID-19 pandemic is also further complicated by the ongoing conflict between the Houthi movement, which controls most of the country, and the Saudi-led coalition, as well as conflicts between various Yemeni groups in the south of the country that are opposed to the Houthis and are backed by Saudi Arabia and the United Arab Emirates, said Thomas Juneau, a Yemen and Iran expert from the University of Ottawa.

“Yemen for years has been a perfect storm of multiple crises at the same time,” said Juneau, a former Middle East analyst at the Department of National Defence. “There is a health crisis, there is a political crisis, there is a security crisis, so the coronavirus is just one additional layer on what was already an extremely complicated and difficult situation.” 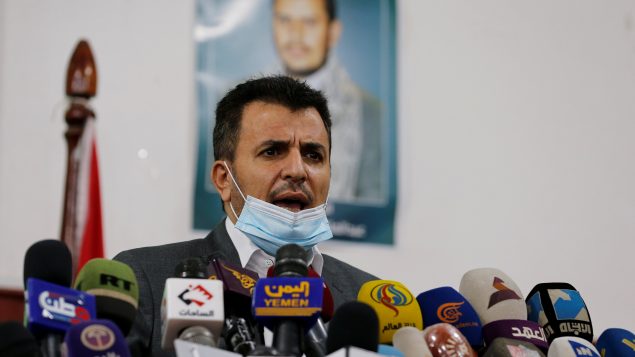 The situation is further compounded by the reluctance of the Houthi rebels to cooperate with international humanitarian organizations and UN agencies, Juneau said.

“The Houthis are extremely suspicious of international organizations, it is just consistent with their worldview, they do not have experience governing outside of their small area before the current war and they are just extremely paranoid,” Juneau said.

The United States, one of the largest donors, decreased its aid to Yemen earlier this year, citing interference by the Iran-backed Houthis. U.S. officials did not make any pledges on Tuesday but did not rule out additional funding in the future. 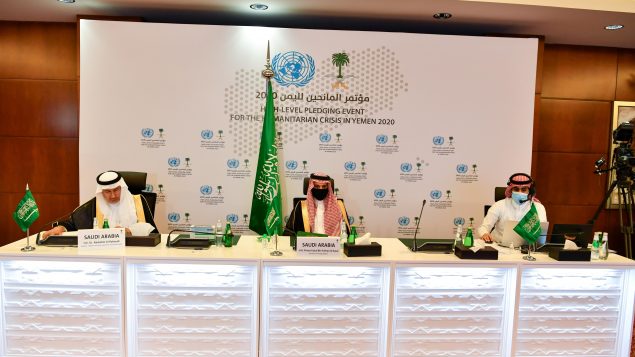 Saudi Arabia, which leads a coalition of Arab states opposed to the Houthis, is another factor in the ongoing strife in Yemen, critics have pointed out.

“Saudi Arabia did not start the war in Yemen but it added to it when it intervened in 2015 and has been responsible for a good proportion of the destruction in Yemen,” Juneau said. “At the same time for political reasons, for diplomatic reasons it is a large humanitarian donor to Yemen.”

Saudi Arabia pledged $500 million US in aid for Yemen on Tuesday.

Riyadh is trying to legitimize its role by working with the UN but also because the world body has the bureaucratic and logistical capacity that Saudi Arabia lacks, Juneau added.

Saudi Arabia is also conscious of the fact that its international image has suffered – particularly in the U.S., its main ally – because of the war in Yemen, Juneau said.

“So it’s trying to buy its way out of that damage but at the same time on the ground in Yemen, Saudi Arabia is trying to buy influence with its humanitarian activities like any other country does,” Juneau said.

Gould’s announcement of $40 million on Tuesday brings Canada’s total contributions to Yemen since 2015 to $220 million.

NDP critic for International Development Heather McPherson said while Canada’s contribution was a step in the right direction, she “has been hugely disappointed by Canada’s response to date.”

The NDP has also been vocal about its opposition to Canada’s sales of weapons to Saudi Arabia, she added.

“We know that these arms are being used potentially against the Yemenis, so it also feels very much like our government strategy is to give aid with one hand and perpetrate violence with the other,” McPherson said.

Gould called on all relevant actors to work on finding a durable solution to the conflict in Yemen.

“The people of Yemen deserve decisive action. Their suffering must end and their rights and dignity must be protected,” Gould told the pledging conference. “We must do everything possible to make this happen.”

With files from the Associated Press