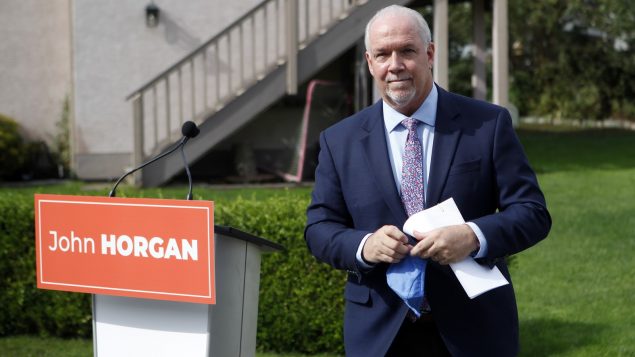 Premier John Horgan leaves the podium following his announcement that there will be a fall election as he speaks during a press conference in Langford, B.C., on Monday September 21, 2020. (The Canadian Press/Chad Hipolito)

During a news conference Horgan announced that he met with B.C. Lieutenant Governor Janet Austin and she granted his request to dissolve the legislature. The general election will happen on Oct. 24.

Horgan said that he struggled with the decision to call an election during the COVID-19 pandemic, but believes now is the time.

“This pandemic will be with us for a year or more. We can either delay that decision and create uncertainty and instability over the next 12 months, more speculation, […] or we can do what I always believe is the right thing and ask British Columbians what they think.”John Horgan, B.C. Premier

We’ve accomplished a lot in the last 3 1/2 years. But COVID-19 has thrown us all a curveball. Right now, we need to know that people are with us in our plan to fight this pandemic and build an economic recovery. I'm asking for your support to keep BC on the right track. pic.twitter.com/QhKFjPFIAx

Horgan said that the election can be conducted safely, and that B.C.’s Provincial Health Officer Dr. Bonnie Henry and Elections B.C. have worked very hard to make sure that British Columbians will not be putting themselves at risk.

There are some criticisms to Horgan’s decision to call an election in the middle of the COVID-19 pandemic.

“The only reason for this general election is to try and secure the jobs of the NDP … it’s not necessary.”

On Twitter, the British Columbia Green Party Leader, Sonia Furstenau said that she had met with Horgan on Friday, and told him that he had a stable government.

I met with @jjhorgan on Friday and told him he had a stable government. This election is completely unnecessary.

The NDP has chosen the pursuit of power over the health and safety of British Columbians. #bcpoli

“This election is completely unnecessary,” Furstenau wrote in a tweet. “The NDP has chosen the pursuit of power over the health and safety of British Columbians.”

With files from CBC News and Justin McElroy