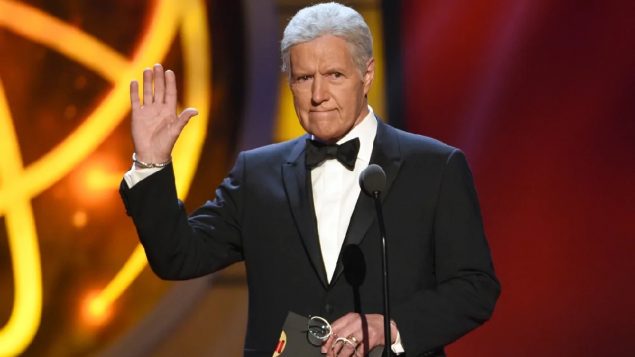 Son of a Ukrainian immigrant father and French-Canadian mother, Alex Trebeck became one of the best loved and respected TV hosts in North America. Jeopardy! host Alex Trebek, shown presenting an award at the 46th annual Daytime Emmy Awards in Pasadena, Calif., has died, the show announced Sunday. He was 80. (Chris Pizzello/Invision/AP)

Alex Trebek, age 80, has died after a long battle against pancreatic cancer,.

His family said he died peacefully at home.

TV show hosts can be extremely popular, but it’s rare that the descriptions would also include the words ‘beloved’ and ‘respected’. Canadian-born Trebek hosted the American syndicated show Jeopardy! for over three decades and has been known by literally many millions of dedicated viewers in North America over that time.

He always insisted it was a ‘quiz’ show and not a ‘game’ show.  There were no silly costumes, no shouts and screaming and jumping up and down or running around the set. Contestants on the show had to have a vast encyclopedic knowledge ranging from history, to politics, to sports, to the arts, world events, and more. 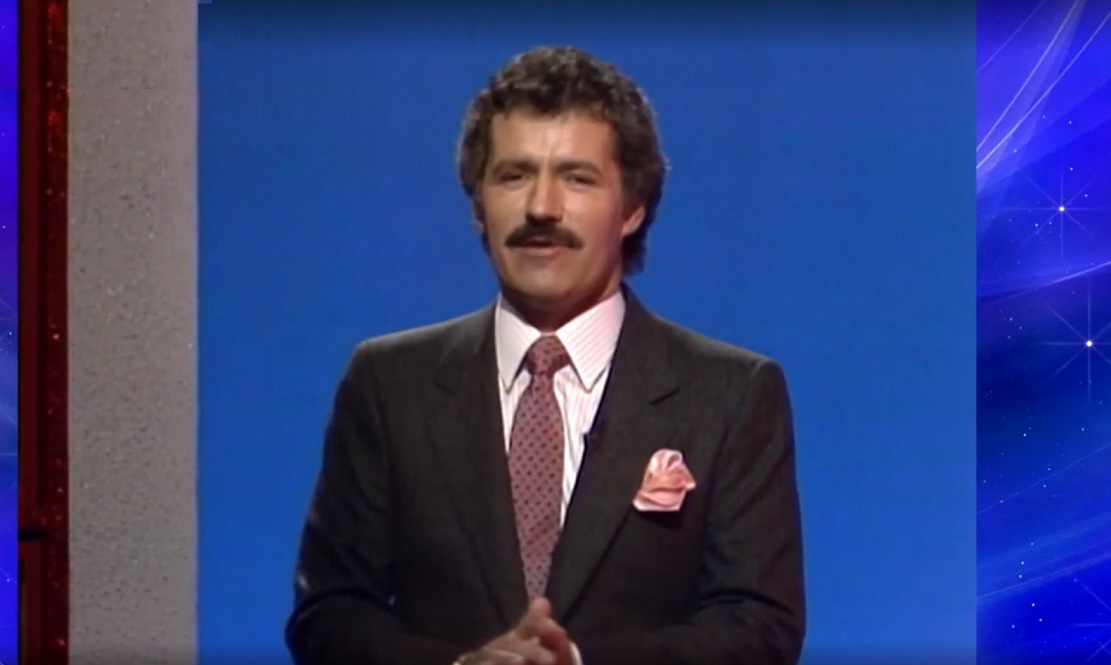 Trebek always fashionable, with his celebrated moustache. It created quite a bit of media interest when after years, he shaved off the trademark ‘stache (Jeopardy! via CBC)

Host Trebek set the tone for decorum with his style and his tailored suits. as the show won several impressive TV awards over the years, with Trebek himself winning several  Daytime Emmy awards as ‘Outstanding Game Show Host’.

Alex Trebek began his career while in university in Ottawa working as a replacement announcer on the public broadcaster, CBC. He then began hosting a variety of TV shows including ‘Reach for the top’, a quiz show for high school students which was in many ways similar to ‘Jeopardy!”

In the 1970’s he decided to try his hand in Hollywood. An initial game show hosting gig in 1973 followed with the help of another Canadian. Alan Thicke, and thereafter others followed until he became the iconic host of Jeopardy!, a calm, composed but occasionally witty host.

He never shied away from his Canadian roots, and occasion questions about Canada on the show would often stump the American contestants. 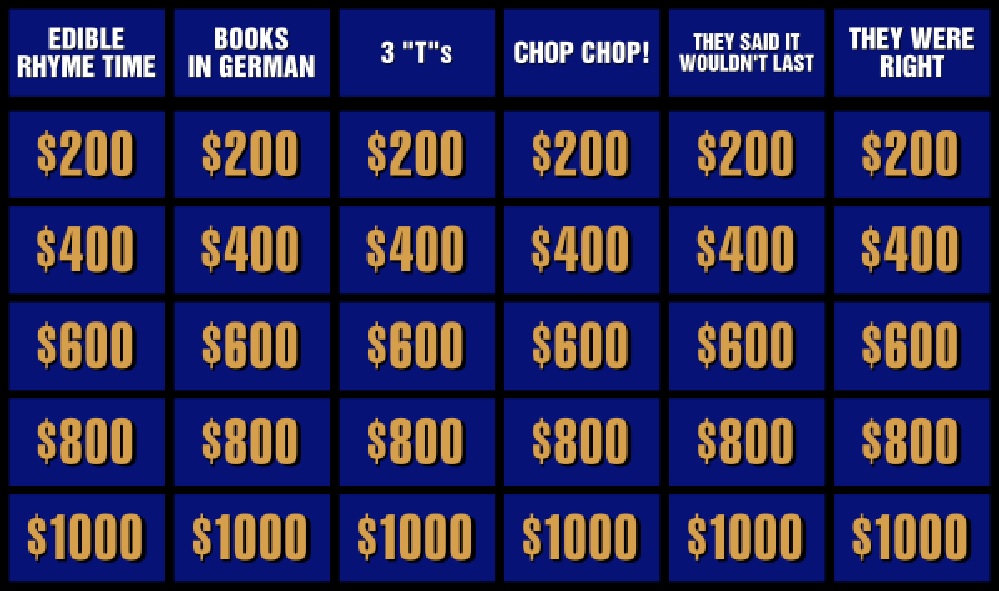 An example of the Jeopardy quiz categories, which changed each round. The show celebrated intelligence and a vast general knowledge of trivia. ( Jeapardy!)

In later years he would continue the production schedule even through a variety of ailments ranging from brain surgery to remove clots, a heart issue, and a foot injury which resulted from chasing a robber. He also continued as long as possible during his cancer treatments during which he remained optimistic saying he hoped to beat the high statistical odds against surviving pancreatic cancer.

He announced his cancer in March 2019 saying, Now normally, the prognosis for this is not very encouraging, but I’m going to fight this, and I’m going to keep working. “And with the love and support of my family and friends and with the help of your prayers, also, I plan to beat the low survival rate statistics for this disease,” 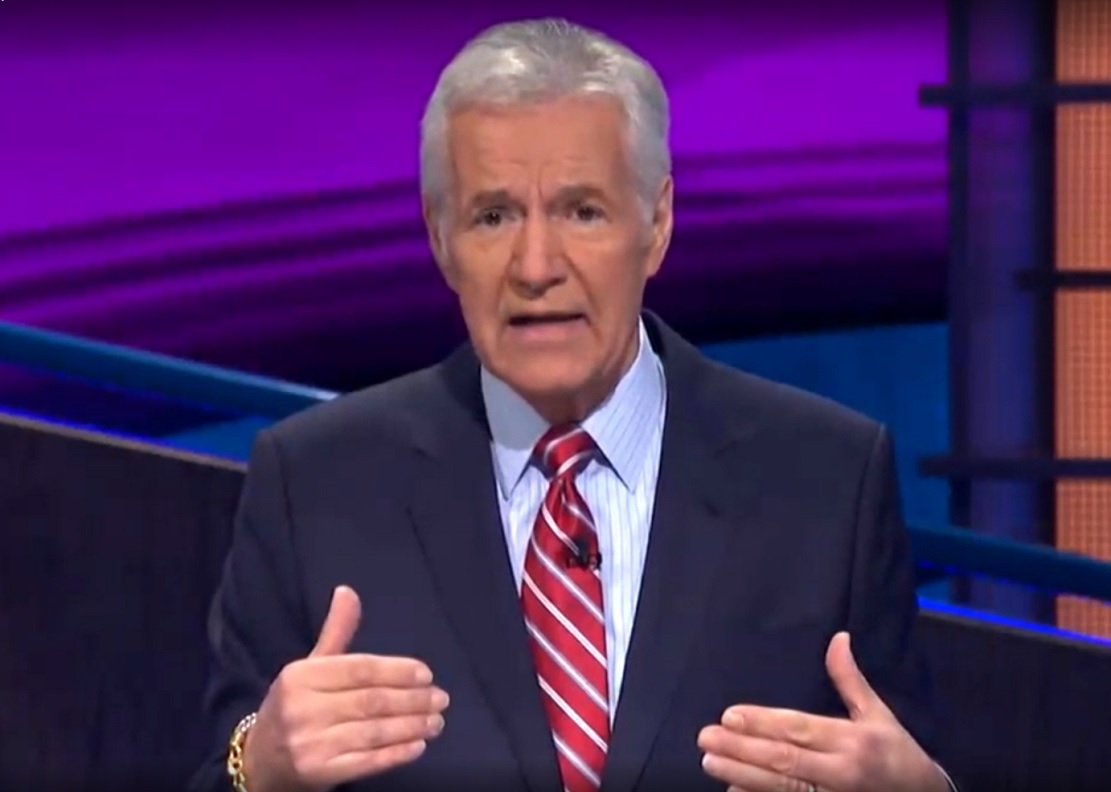 In March 2019 Trebek went public with his cancer diagnosis, but joked that he would beat the disease, in fact had to because he was under contract to host the show until 2022. ( via CBC)

In addition to his TV work, which included several other occasional events over the years, like hosting the U.S National Spelling Bee, other memory shows like ‘Classic Concentration’ (1987-91), as a moderator of an American gubernatorial debate,  had guest star roles on other shows  and was a willing promoter of charities, including World Vision.

Trebek hosted well over 8,000 episodes of Jeopary!, which he loved because it made ‘intelligence’ popular. His last taping was October 29, and the shows with him hosting will run through December with the final Trebek hosted show on Christmas Day.