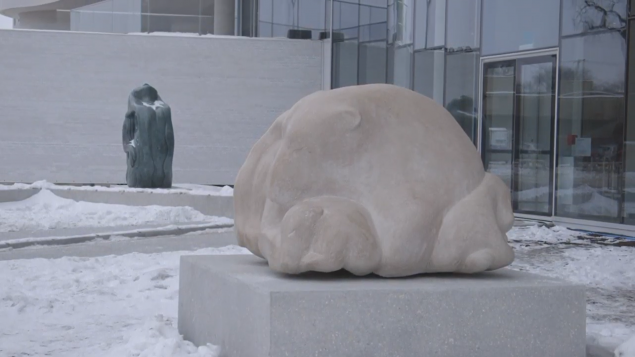 The Winnipeg Art Gallery (WAG) has unveiled another monumental sculpture that will greet visitors at its Qaumajuq Inuit art centre once the world’s largest collection of Inuit art opens its doors later this year.

Carved from a massive Indiana limestone boulder, the sculpture features polar bear cubs playing and snuggling with their mother but also presents the viewer with a bit of visual 3D riddle, said Stephen D. Borys, director and CEO of the WAG.

“You may see five cubs around the sculpture, but Abraham will tell you there is actually only two,” Borys said in a promotional video featuring the history behind the monument. “That’s because the other three are representing different stages of the cubs’ adolescent development.”

The idea for the sculpture started in 1990 when he first received the five-tonne limestone boulder, Ruben said.

“The following year, I started roughing-out the shape of a mother bear, and every other year I would rough-out more and more of the features of the sculpture,” he said.

Initially it was intended to represent the different bears common to the various ancient circumpolar cultures, said the Inuit artist, who was born in 1951 in a camp south of Paulatuk, Northwest Territories and east of the Mackenzie River Delta.

“But when the idea for an outdoor sculpture emerged, the concept evolved as I wanted it to be something that children could relate to, climb over, and play with,” said Ruben, who’s been living in Vancouver since 1980. “So I included young bear cubs at different ages to represent the different stages of childhood development.”

The massive statue will join 32 other works at Qaumajuq Inuit art centre by Ruben.

“It is a sculpture that can be touched, hugged and enjoyed by all… especially the children!” Richardson said.

The plaza also features a monumental sculpture by Inuit artist Goota Ashoona, which was unveiled in late January. 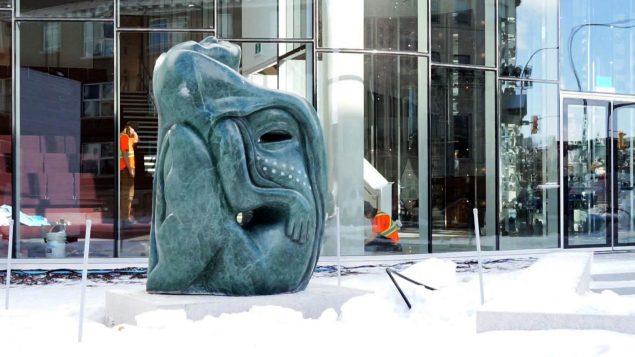 Carved out of a giant boulder of Verde Guatemala marble, the sculpture is a celebration of the light of knowledge, both traditional Inuit and scientific.

The artwork was commissioned by the Manitoba Teachers’ Society “to honour teachers all around us—in the land and in our lives—who reveal the truth, wisdom and beauty that connect us all.”

Meaning “it is bright, it is lit” in Inuktitut, Qaumajuq (pronounced as KOW-ma-yourq or HOW-ma-yourk) is billed as “the first art museum of its kind, bringing Inuit voices to the forefront, and dedicated to the art and culture of Inuit from Canada and beyond.” Its collection boasts 14,000 pieces of artwork by Inuit artists.