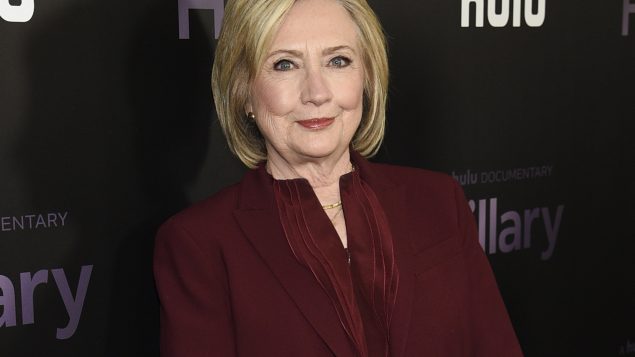 FILE - Former secretary of state Hillary Clinton attends the premiere of the Hulu documentary "Hillary" in New York on March 4, 2020. Clinton is teaming up with her friend Louise Penny on the novel “State of Terror,” out Oct. 12, 2021. (Evan Agostini/Invision/AP, File)

The book, to be called State of Terror, comes out Oct. 12, and will be jointly released by Clinton’s publisher, Simon & Schuster, and Penny’s, St. Martin’s Press.

The story follows a novice secretary of state who has joined the administration of her rival, a president inaugurated after four years of American leadership that shrank from the world stage.

A series of terrorist attacks throws the global order into disarray, and the top U.S. diplomat is “tasked with assembling a team to unravel the deadly conspiracy, a scheme carefully designed to take advantage of an American government dangerously out of touch and out of power in the places where it counts the most,” the two publishing houses said in a joint press release.

“Writing a thriller with Louise is a dream come true,” Clinton said of her Knowlton, Que.-based co-writer in a statement on Tuesday. “I’ve relished every one of her books and their characters as well as her friendship. Now we’re joining our experiences to explore the complex world of high stakes diplomacy and treachery. All is not as it first appears.”

Penny is an award-winning author whose novels include The Cruelest Month and The Brutal Telling.

“When it was suggested my friend Hillary and I write a political thriller together, I could not say yes fast enough,” Penny, a former CBC journalist, said in a statement. “What an incredible experience, to get inside the State Department. Inside the White House. Inside the mind of the secretary of state as high stake crises explode.”

Penny said before they began working on the novel, they talked about Clinton’s time as secretary of state in the Obama administration.

“What was her worst nightmare? State of Terror is the answer,” Penny said.