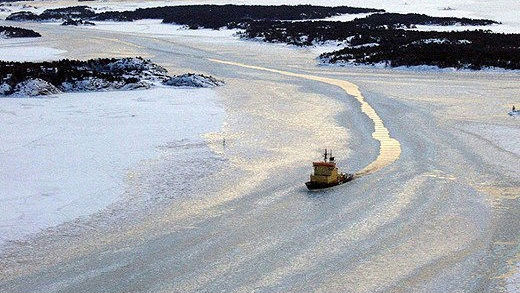 With growing international interest in the Arctic’s oil and gas reserves, Sweden’s icebreaker fleet has never been in greater demand. And with several ships re-fitted for Arctic missions, experts say it is set to play a bigger role in Arctic shipping, prospecting, and research expeditions in the region.

While the main task of the icebreaker fleet is to keep shipping lanes open in the Baltic Sea in the winter, there are increasing opportunities in the Arctic during the summer, said Thomas Årnell, head of ship management at the Swedish Maritime Administration.

“Research activity has been growing in the region for some time. But in recent years there’s been more and more sea bed mapping by countries who want to assert their rights over the territory as well as prospecting for oil,” he said.

Sweden is one of just a half dozen countries operating icebreakers. Its fleet of five state-owned ships, originally owned by the navy, is the world’s third largest, behind Russia and Finland.

The fleet’s flagship, the Oden, was the world’s first non-nuclear icebreaker to make it to the North Pole in the early nineties. It is now entirely devoted to polar research and commercial expeditions.

The ship, equipped with state of the art sea bed imaging equipment, recently returned from a controversial mapping exercise off the coast of Greenland, where it was leased out to a US oil prospecting company. It’s now en route to the Antarctic, where a crew of Swedish and American researcher will carry out polar research on board.

“Almost all the research they will do down there is related to climate change – such as mapping large scale ocean currents around the Antarctic and measuring carbon dioxide levels,” explained Björn Dahlbäck, director of the Swedish Polar Research Secretariat, who was part of the research team on the first ever Swedish icebreaker expedition to the Arctic in 1980

“There are only a couple of other ships in the world able to go into thick ice and do Arctic research. So there is quite a high demand from other countries to use it.”

Although his organisation has first call when it comes to expeditions with the Oden, Dahlbäck wants the ship to be exclusively reserved for research in the future rather than contracted out for profit-driven commercial projects.

“We would like to see the Oden as a hundred percent publicly funded research vessel so that Swedish, and international, researchers have a tool for their research in the long term.”

Two other ships in the fleet – the Atlee and the Frej – are currently being refitted with lifeboats and other safety equipment for expeditions to the poles. Although it is still unclear exactly what kind of expeditions they will take on, Mikael Sandström, captain of the Frej, expects they will be similar to the Oden.

“The intention is to use them during the summer months for deep sea expeditions, doing research at the pack ice areas, looking for oil,” he said.

That last point is not popular with environmental groups such as Greenpeace which oppose Swedish icebreakers involvement in oil prospecting. They say the Arctic should be declared a nature reserve, similar to the Antarctic, as its fragile environment would be devastated by an oil spill.

“If the ships are used to increase knowledge of the Arctic and how to protect it, that would be very positive,” said Dr Therese Jacobson, at Greenpeace Nordic.

“But if they are hired out to the oil industry and their middle men then that would be irresponsible. The Swedish government should show leadership and think long term about protecting the Arctic and not do the oil industries bidding.”

Thomas Årnell, at the Swedish Maritime Administration, rejects the criticism.

“We are state-owned and always make an ethical judgement when we lease out a ship – but we also are business driven and funded by the fees we raise. Until now, the expeditions have been about research, even if the one last summer also had a commercial use,” he said.

“And if we had not done the mapping, someone else would have done it – and we have safer ships than many others that may have been used.”