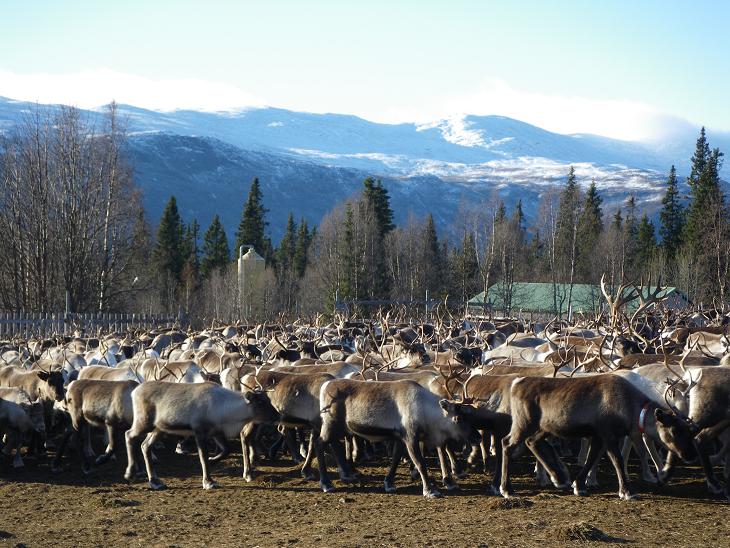 Wind power is viewed as one of the hottest alternative energy sources in the wake of changes to the climate.

But wind power requires large areas of land and this is seen as a considerable threat to the reindeer industry in Scandinavia.

The Sámi National Association in Sweden and the wind power industry are conducting a joint project to determine how the two industries can coexist.

Recent research regarding the effects of wind power on the reindeer industry was the most important point of the program when the third and closing seminar of the project was held in Luleå in northern Sweden.

But what perhaps made the deepest impression was Patrik Lundgren’s contribution to the debate regarding the anxiety felt in the Sámi reindeer herding community of Östra Kikkejaure about what will happen if the planned major wind power park in the Municipality of Piteå is built.

Plans call for 1,101 wind turbines on the Sámi reindeer herding community’s grazing lands, which would entail the loss of 25 percent of the grazing lands from October to April.

“What do I say to my 15-year-old son?” asked Lundgren. “His greatest wish is to begin herding reindeer. Do I tell him that it’s just as well he forgets his plans? I wonder if the wind power industry feels any responsibility for these kinds of extreme consequences.”

Helén Larsson from the Sámi National Association interviewed reindeer herders in eleven Sámi villages with experiences of wind power parks during construction and after commissioning.

“Most of the herders we interviewed thought the reindeer would grow accustomed to the actual wind turbines. But the reindeer industry must constantly look at the whole, along with other encroachments, and many people are worried about the overall situation.

What impact will 1,100 wind turbines have on an area such as Östra Kikkejaure?

“This is something that just cannot be predicted at present,” says Helén Larsson. “But I can understand their anxiety. Wind power is relatively new to Sweden and to the reindeer herding region.

“We’re facing all too many uncertainties but I’d like to tell the researchers to begin looking at what such an establishment entails for reindeer herding.”

Anna Skarin at the Swedish University of Agricultural Sciences is conducting research into wind power’s effects on the reindeer industry.

Is the wind power industry too quick to plan before there’s been time to investigate the possible consequences?

“Yes, that’s my opinion,” says Skarin. “Everything is to be built at once before really knowing anything. And then we suddenly find ourselves in the situation of having all those wind power turbines already in place.”