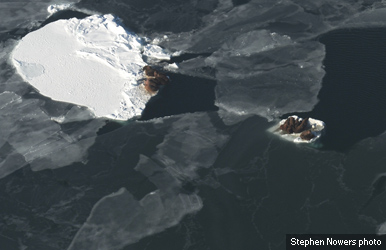 Simon Donner, a geography professor at the University of British Columbia, posted on the Energy Collective blog that he was amazed when a Iqaluit couple told him at a holiday gathering about the open water in Frobisher Bay at mid-month.

“I almost coughed up my food,” Donner wrote. “The Bay is normally frozen a month or two, or more, before Christmas, allowing people to head out on the ice for hunting, celebrating, etc.”

In an interview with CBC News, NSIDC director Mark Serreze blamed the open water on a lingering pattern of high-pressure — put in place by an atmospheric phenomenon known as the Arctic Oscillation.

“Now you’ve got all this open water where you usually don’t have it, and that pumps heat into the atmosphere,” he told CBC News here. “So it’s kind of a double whammy you’ve got working on there right now. … You may be seeing a little bit of a hint of what the future holds in store for you.”

So what’s the Arctic Oscillation — and how will it ruin my seal hunt?

The Arctic Oscillation is a hemispheric shift in atmospheric pressure that alters storm tracks and drives unexpected weather. Over decades, it morphs from one state to another, something like the behavior of El Nino and La Nina of the tropical Pacific. It’s the same phenomenon that helped reduce ice cover in 2009-10.

This year, the old AO (as nicknamed by some of those technical types) has clicked into what scientists call a “negative phase” — with high pressure over the North Pole and low pressure at mid-latitudes (the Lower 48 states.) Once it’s in place, it sort of feeds on itself.

“The warm temperatures in December came from two sources: unfrozen areas of the ocean continued to release heat to the atmosphere, and an unusual circulation pattern brought warm air into the Arctic from the south,” the NSIDC explained in its monthly release. “Although the air temperatures were still below freezing on average, the additional ocean and atmospheric heat slowed ice growth.”

What does this mean for Alaska?

“I think the recent data indicate how the sea ice responds over the short (days, weeks, months) to weather and short-term climate,” Meier explained.

Winter variations in ice cover are more directly controlled by weather and climate patterns — like the Arctic Oscillation – than by atmospheric warming due to greenhouse gases, Meier added.

A few weeks ago, a team of scientists argued in the journal Nature that there was no irrevocable “tipping point” to Arctic ice loss — that people could still halt the decline of summer ice and save species like the polar bear from extinction by reducing greenhouse gas emissions.

The winter ice extent doesn’t say much about that issue, Meier said.

“Where we expect to see a long-term warming signal is in the amount of summer ice remaining and the thickness of that ice,” he said. “In winter, temperatures are still cold, below freezing, most everywhere in the Arctic, so there is still ice growth — it’s just a matter of where, when, and exactly how much. Thus winter conditions don’t tell us a lot about any tipping point.”

Doug O’Harra is an Anchorage writer.