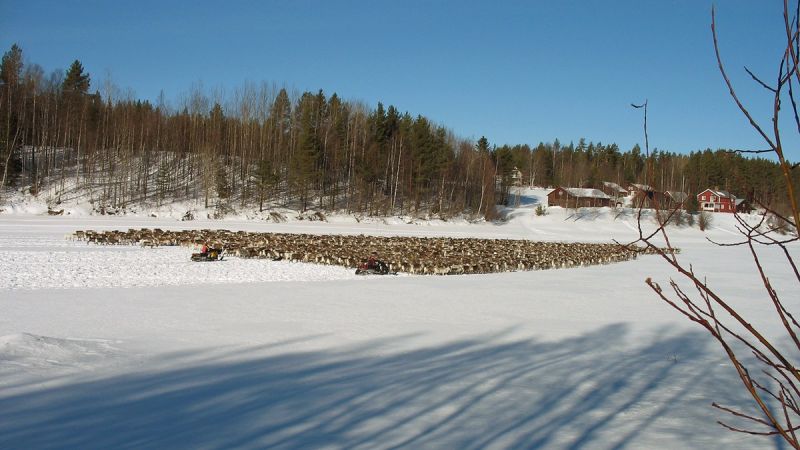 New reports claim there’s been a 200 per cent increase in the use of chemical fertilizers in  Swedish forests over the last decade. Industry and environmentalists are now clashing over the resulting profits and  possible damages.

In this forest-covered nation, a walk in the woods looking for wild berries … and a profession in the forest industry are both crucial for the nation’s nature-loving soul AND the economy and jobs.

But these days, the sight of helicopters and tractors spreading chemical fertilizers over and among the trees has again become increasingly common – extending over ever-more woodland territory.

Good business and clever investments..? Or killing the wild flowers, red lingonberry and blue berries so coveted by many Swedes, spreading harmful chemicals even on our sea..?

Devasting the moss and licheans necessary for the winter grazing of the reindeer herds in the far north?

Speaking to Swedish Radio News, Joachim Strengbom researcher at the Swedish Agricultural University in Uppsala north of Stockholm says the fertilizer is perfect for certain grasses that choke the berries and other plants.

He maintains that the changes to the forest plant life can be enormous – with up to 40% of the wild berries disappearing compared to unsprayed areas.

The experts point out that back in the 80’s, chemical spraying in the forests was common in this Nordic nation – but that this diminished during the sharp environmental debates of the 90’s.

Roger Hellestrand who works with production questions at the state-owned Svea Skog or forest company, says back then, there was a stronger focus on environmental questions.

Hellestrand adds that in 2008, the minister of agriculture in the center-right government coalition declared that one could increase chemical spraying while still maintaining good environmental practices – opening the doors to the increased use of chemical spraying.

He says that it is clear that the chemicals make the trees grow thicker and increase their volume production.

But he adds there are risks. If the vegetation doesn’t absorb the chemicals, then they can leak through the creeks, streams and rivers into the ecosystem.

Researcher Joachim Strengbom adds that just like the chemical fertilisers used on the farm land fields, these chemicals leak through the water system and the ground water eventually reach the sea – adding to the giant poisonous blooming of algae chocking beaches and covering wide areas of the Baltic.

Concerning the indigenous peoples of the far North and their reindeer herds, Lars Evert Nutti of the Sami village near Jokkmokk says he and his colleagues are very worried about the chemical spraying of the forest in their area – and that the moss and lichens are the most important winter forage for his animals.

The Sami reindeer herder says that the grazing areas are diminishing in a serious way – making it harder to keep the herds alive and for the survival of newborn reindeer calves.

Roger Hellstrand states diplomatically that it’s important for the forest industry to have a meaningful dialogue with the reindeer raisers about the situation – and that both have much to teach each other.

But the industry shrugs off some of the warnings.

At the SCA Skog company, Mike Bobik assisting with the fertilizing programs, maintains that this is necessary for the forest industry in Sweden.

He adds that of course this is a question of money. This use of fertilizers is a very, very profitable investment for the companies.

Göran Örlander of Södra Skogsägare representing thousands of small-scale forest owners in southern Sweden says restrictions on the use of chemical fertilizers are stricter than for the vastly under populated north – and he thinks that the dangers to the environment might be over estimated – and that the restrictions could be reduced.

The vice chairman of the parliament’s environmental and agricultural committee Bent-Anders Johansson of the ruling Moderate Conservative Party, argues that research on the issue has continued for decades and there are still no real rules to follow.

He insists that only 0.3 per cent of the Swedish forests are sprayed with chemicals, and that he notes the disappearance of wild berries in this region. But  if Sweden is to supply itself and the rest of Europe with timber, paper and pulp and other forest products, we have to weigh this in the balance, he says.

Helena Leander of the opposition Greens and member of this parliamentary committee calls for a temporary stop to the chemical spraying until more research is carried out on the effects on nature and biological diversity.

The winter grazing for the reindeer in the North has begun as snowfall and snowstorms hit the northern mountains and northern forest land.

The berry season is long over this time of year, but the debate might well kindle a question or two among the wild mushroom pickers this time of year if that rather empty basket can be blamed on other colleagues who got there first – or on that helicopter.