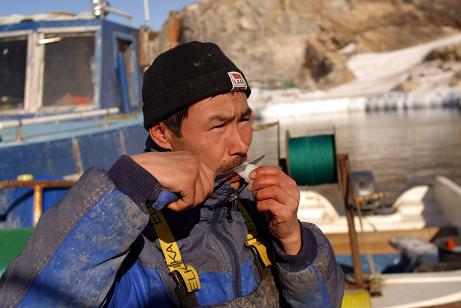 Health professionals must be honest with Arctic peoples about the level of contaminants in some traditional foods says Henning Pedersen, chief medical officer at the Queen Ingrid’s Hospital in Greenland’s capital, Nuuk.

Pedersen made the comments at a panel discussion on Human and Environmental Well-Being at the 2012 International Polar Year Conference held in Montreal this week.

Pedersen, a long-time resident of Greenland, has been involved in environmental research in the territory since 1983.

Greenland holds world records for many contaminants and they’re frequently found in things like seal meat and blubber, he said.

This can have serious effects on human health especially among people in their reproductive years that want to start families.

Pedersen acknowledged the importance of traditional foods like seal to the Inuit diet and to Inuit culture but says that can’t get in the way of what health research has shown.

“I like (eating) sea mammals myself,” Pedersen told the audience during question period. “But from a health point of view I have to be honest, there are too many contaminants in them and we are surprised every year that new ones are coming up.

“We have to face reality, if we only use our feelings, biologically, we will get diseased.”

“We don’t need to import meat, Pedersen said. “That’s not good for our health, our economy or our climate. We can just use the food we have outside our door.”

When he went on radio in Greenland to discuss his recommendations two years ago, he was surprised by the positive reaction, he said.

“I thought I would be knocked down,” he said. “But the response from hunters and the man on the street was quite good.”

“We don’t tell people what to do. We just say ‘It’s your choice what to eat, but as a health professional, I have to make this recommendation.'”

“We must be honest. It shows respect.”

Toxic Metals in Whales Threat to Humans: US Study, The Associated Press

One thought on “Researchers must be honest with Arctic peoples about food contaminants: doctor”