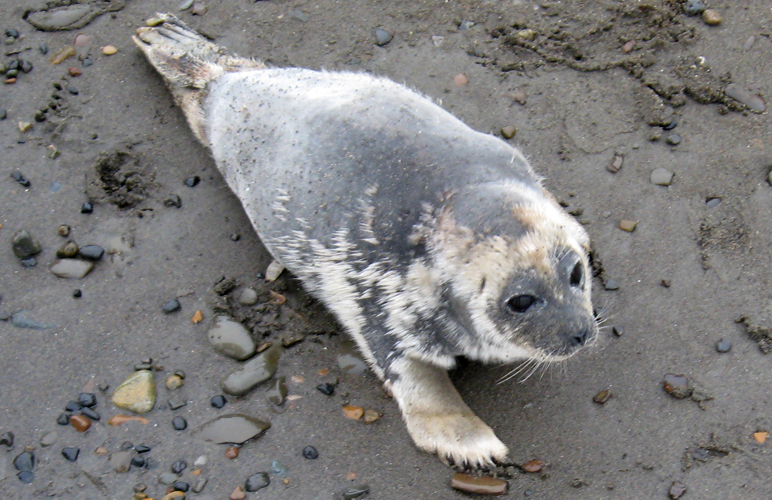 The mysteries behind what made Alaska seals and walrus sick last year and caused bald spots on polar bears this spring largely remain unanswered. For all of its advances, science isn’t a silver bullet in this human quest for knowledge. Hunters in Alaska’s Arctic want assurances that the animals they harvest are safe to handle and eat. And they are not alone.

The collective stewards of Alaska marine life — hunters, state and federal managers, academics and researchers — want to know why the animals got sick.

The illness struck seals in 2011, causing hair loss, oozing lesions, lethargy, organ problems and, in some cases, death. It showed up in high enough numbers across Alaska’s Arctic coastline that that the National Oceanic and Atmospheric Administration (NOAA) declared it an UME, or “Unusual Mortality Event” late last year.

“We do not yet know the cause,” NOAA spokesperson Julie Speegle said via email. The event now includes all four species of ice seals (spotted, bearded, ring and ribbon) and Pacific walrus. “We hope to find out what it is.”

In 2011, some 40 of 100 sick seals were found dead. Others were in varying states, some near death. Similar outbreaks have been documented in Canada and Russia. During hunts earlier this year in the Bering Sea, 50 sick seals — mostly ringed and bearded — were found. Researchers believe only a few had become ill recently; most were survivors of the illness from the prior year.

Despite intense research and tests, there’s no answer yet. “In many Unusual Mortality Events,” Speegle noted, “a definitive case is never determined.”

For hunters, life goes on

Alaska Native hunters who rely on the animals for food, clothing and to make artwork and handicrafts find the lack of answers unsettling. Bird flu and other flus have been ruled out, as have a host of other known viruses. But knowing what isn’t the cause doesn’t comfort Alaska’s indigenous hunters.

“Last year was the worst I had seen in my lifetime,” said Dan Olanna, an Inupiat seal hunter from Shishmaref, an island village located north of the Bering Strait in the Chukchi Sea. “I grew up here, but we rarely saw so many sick before.”

Last year, about a dozen of the 30 seals Olanna harvested were sick. Some appeared so ill that Olanna and his crew let them go out of fear of coming into contact with the sickness.

Officials have not found any humans infected, and they have encouraged families to continue gathering food. But they also recommend thoroughly cooking meats and thoroughly washing hands and equipment afterward.

Olanna has been waiting for the island’s gusty weather to calm before embarking on his annual fall hunts. Fall is an active time for seal hunters, who say the animals’ coats are thicker and the meat better tasting this time of year. But high winds have kept him indoors much of this fall, and the cost of going out is too high to just go, in his words, “motor around for nothing.” Gasoline is nearly $7 per gallon, and oil and ammunition have grown increasingly expensive.

While he feels comfortable harvesting healthy seals, a quiet concern nags at him about what might be affecting the animals, which are used to feed his family and dog team, and whose fur coats are turned into hats, mittens, gloves, pants and socks by Olanna’s wife. An unknown sickness is worrisome.

“It affects our subsistence. It may affect our health. We’d like to find out what is happening. The sooner the better,” he said.

“Last year, it was a scare and this year it doesn’t seem like it too much,” said John Goodman, chairman of Alaska Ice Seal Commission. Goodman, from Kotzebue, said he hasn’t received any new reports of sickly seals, although he knows it’s early in the season. While people may want to know why the seals fell ill, he doesn’t think they’re overly nervous about it.

People are still hunting, and in the last few days he has consumed seal oil and a great-tasting pot roast made with a young bearded seal.

Among hunters in the Native community, Goodman said they’ve wondered if the illness is merely nature taking its course — a way to adjust when a seal population has become overly abundant. There are other theories, too. Some suggest that the seals may have come into contact with an ocean pollutant, perhaps from a waste-dumping ship. Goodman said he doesn’t believe the ocean is polluted, but thinks a one-time exposure from a single ship is plausible. It would also explain, he said, the hair loss that polar bears were found to have this year, much of it near the head and neck. If they were swimming, that’s where they’d come into contact with it, he theorized.

Scientists believe that the illness affecting seals and walrus is similar, but most believe that whatever caused polar bears to lose hair may be different. Only one walrus has turned up with signs of the illness this year, and none of the polar bears feasting on whales in Kaktovik this fall — more than 80 animals — had any bald spots. In spring, researchers found 23 of 82 bears observed along the North Slope had patches of hair loss.

“Despite extensive laboratory analysis, no specific disease agent or process has been identified. This may suggest that the underlying cause of this disease is most likely complex, involving a variety of factors,” NOAA stated in a flier updating the UME in June 2012.

The scientists have ruled out bird flu and influenza A and B, known biotoxins like those from algae blooms, distemper, pox and a handful of other viruses. Many bacteria have been nixed, too.

As researchers continue looking, they’re also awaiting the results of more in-depth radiation testing (in February, NOAA said early tests showed contamination from Japan’s Fukoshima power plant disaster was an unlikely cause) and are looking at the ocean environment for possible clues. Water temperature, sea ice condition, ocean salinity and pH, in addition to food sources, are aspects of the seals’ marine ecosystem that are also under investigation.

“At this point we are thinking it may be a combination of factors,” Speegle said. The theory is, something is weakening the animals’ immune systems and in a more weakened state they are more susceptible to illness.

An updated report from NOAA is due out at end of the week.